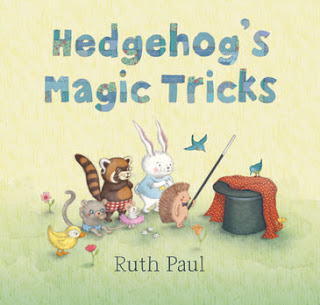 Hedgehog is performing magic tricks for his friends. But will they work?
Hedgehog does magic tricks. Today his helper is Mouse. Hedgehog is going to make Mouse disappear

Ruth Paul is an award-winning author and illustrator from New Zealand. She draws on everyday life for inspiration and ideas, and is particularly interested in how people get on together. Ruth calls herself and old-fashioned illustrator, working in hands-on media such as acrylic, pastels and pencils, using Photoshop to do last-minute work on scans where required. Her title The King's Bubbles won the Children s Choice Award, New Zealand Post Children s Book Awards, 2008; and the Children s Book Design Award, Book Publishers Association of New Zealand Design Awards, 2008. She also illustrated the Walker Stories titles Mr Tripp Smells a Rat (2011) and Mr Tripp Goes For A Skate (2012). Ruth lives in the country in a straw-bale house powered by its own remote electricity system, with her husband and two young sons. 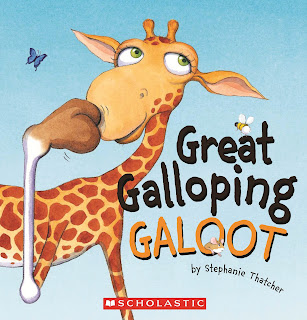 Galoot was a very clumsy giraffe … but even clumsiness has
its advantages!
Galoot was always tripping over things and the other animals
would he heard shouting, “You great galloping galoot!” But
his parents would always tell him, “Galoot, always be your
best.” And when the log bridge across the river is displaced,
Galoot finally comes into his own and saves the day!
Comical illustrations by the author, full of action and laughs which show
that everyone has a talent for something
About the author/illustrator
Stephanie Thatcher has always loved painting and
drawing, especially drawing people. She has also always
loved books, and worked at North Shore Libraries for
seven years before completing a Bachelor of Visual Arts
at Auckland University of Technology in 1999. Since then
she has worked as a graphic designer in Auckland and
Dublin. She has taken part in numerous art exhibitions.
For the last four years she has concentrated more on
being a mum to her three boys, as well as doing some
freelance graphic design, motion graphics, and
illustration work. She lives in Huia, West Auckland.
The Great Galloping Galoot is Stephanie’s first book.
Published in September by Scholastic - $19.50 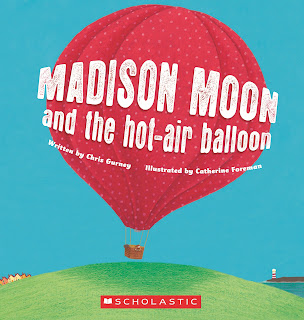 Madison Moon and her hot-air balloon,
each day floated off in the sky.
Topsy and turvy, ziggedy-zag,
what fun could be had up so high.

Tired of the stress of being stuck in traffic, Madison Moon
buys a hot-air balloon and takes to the skies. But when
everybody else decides to do the same, she goes back to her
car, leaving them to fight for space in the wild blue yonder!

About the author
East Auckland author Chris Gurney writes with a faultless
sense of rhyme and rhythm and shows great humorous
talent.
About the illustrator
Madison Moon & the Hot Air Balloon is Catherine Foreman’s
second book. She completed a Bachelor of Graphic Design
majoring in illustration at AUT in 2002, but it wasn’t until
many years and a couple of her own children later that
images and ideas began to materialise into stories that were
complete enough to submit to a publisher.
http://www.catherineforeman.co.nz/
Scholastic - $19.50

Posted by Beattie's Book Blog at 6:12 am