Two newly updated editions celebrate the life and work of the incredible and wonderful Margaret Mahy. 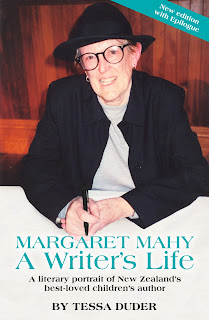 Margaret Mahy: A Writer’s Life by Tessa Duder was first published in 2005 to critical acclaim. Now seven years on, it has been fully updated and re-published. 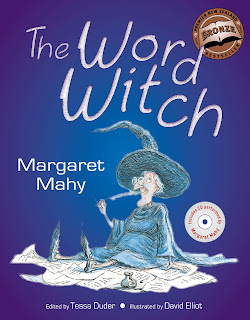 The Word Witch by Margaret Mahy, illustrations by David Elliot, edited by Tessa Duder
was originally published in hardback in 2009 and is the ultimate collection of Margaret Mahy’s much-loved poems and stories in rhyme.  Each of the 66 pieces is accompanied by a poignant illustration by one of New Zealand’s best, David Elliot.

This new paperback edition includes a CD with recordings of Margaret reciting 12 poems including favourites such as Down the Back of the Chair and Ghosts.

The Word Witch is set to delight readers who have grown up with Mahy and will enchant newcomers to her work for many years to come.

‘The Word Witch is a cornucopia of riches, a treasure trove from a living treasure. It's also an inspired idea, which will long continue to inspire. A beautiful and essential book.’
— Bill Nagelkerke

Margaret Mahy was one of the world’s leading authors for younger readers for four decades. In her own country she was popularly known as the writer in the multicoloured wig who wrote marvellously funny picture books and enchanted generations of school children.
Her story had its fairy-tale elements. In 1968, a hard-pressed solo mother of two daughters, working as a librarian by day and writing long into the night, she was ‘discovered’ by a leading American publisher who flew ‘to the end of the earth’ to offer her a multi-book publishing contract.

From those first picture books, through the great novels of the 1980s and new books and awards right up to the year of her death, she came to be regarded as the third in New Zealand’s literary pantheon, alongside Katherine Mansfield and Janet Frame. In 2006 her achievements were recognised by IBBY (International Board on Books for Young People), awarding her the Hans Christian Andersen Medal, the world’s ‘Little Nobel’, for her distinguished contribution to children’s literature.

Tessa Duder's literary career now spans three decades; she is one of New Zealand’s best-known writers. Awards include the Storylines Margaret Mahy Medal, Katherine Mansfield Fellowship, and Artists to Antarctica Fellowship. In 2008 she received an honorary doctorate from the University of Waikato.

The Word Witch by Margaret Mahy
Illustrations by David Elliot
Edited by Tessa Duder
RRP $39.99
Release Date 14 September 2012 - Harper Collins
Includes CD with recording of Margaret Mahy reciting 12 poems, which are also in the book
Posted by Beattie's Book Blog at 6:23 am