Digging Up the Past - archaeology for the young & curious - David Veart 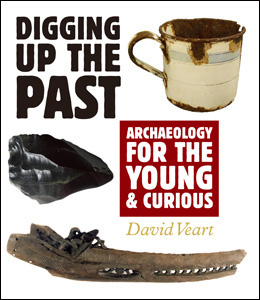 What do moa eggs, seeds chewed by rats and 600-year-old footprints have in common? Lost planes, dog turds and frozen sleeping bags? Archaeologists in Aotearoa New Zealand deal with artefacts like these every day to work out how the people before us lived.
In this book David Veart walks alongside the archaeologists as they dig up the past on top of volcanoes and beneath our city streets, in Māori pā and explorers’ huts. He shows us the things they find - obsidian adzes, enamel cups, the carved prow of a waka - and tells us the remarkable stories they have uncovered of Polynesian voyagers and Pākehā sealers, Māori gardeners and Chinese storekeepers.
Looking for ancient DNA, researching your own rubbish (WARNING: stinky work ahead), doing aerial archaeology with Google Earth (better than leaning out of a biplane) - this book will have readers of all ages thinking like archaeologists as it excavates the stories of the past.
From chapter one:


Leave nothing but footprints
During the late 1970s I worked in London as a volunteer on archaeological excavations. Everything on these sites was ordered and organised, rather like the ancient Roman world we were digging up. The trenches we made were ruler straight and the buckets, trowels, wheelbarrows and little brushes we used were lined up alongside the trench whenever we stopped for morning tea or lunch.
I enjoyed the work, and when I came home to Aotearoa/New Zealand I decided to study to become an archaeologist. One of the first things we did on that university course was visit an excavation being carried out on Motutapu in Auckland’s Hauraki Gulf. After a short ferry ride and a walk along a beach, we arrived at the excavation site, now known as the Sunde site. It was like no archaeological dig I had seen. Instead of the razor-sharp, straight-sided trenches there was a series of long, wandering, intersecting holes in the ground. What was going on?
We took a look. The trench wasn’t following a well-ordered Roman wall or some mathematical grid laid out on the landscape. Instead it followed the wanderings of human and dog footprints preserved in volcanic ash that had erupted from Rangitoto, the island alongside Motutapu (photo below - ©davidwallphoto.com). The ash had been soft and wet when these people and their dogs had walked there about 600 years ago, but it was now rock hard and buried by ash from later in the eruption. 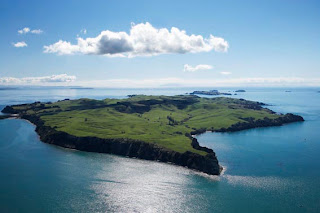 Archaeology is the study of people and their behaviour from looking at the things they have left behind. These things are often nothing more exciting than old rubbish, but occasionally archaeologists find things that can give us a feeling of closeness to the people from long ago. The footprints on Motutapu were like this. We have all walked along beaches leaving our own footprints, but usually the tide comes and washes them away. For the people on Motutapu, a walk across the soft, wet volcanic ash had been frozen in time, making it look as though they had walked, not centuries before in the shadow of a rumbling volcano, but minutes before we arrived at the site. It was totally different from anything I had seen before. This wasn’t some far-off relic of a past empire. This was local and ours – a history created by people who had shared the same country as me. I was hooked.

Photo left “Archaeologist Mica Plowman with a moa bone excavated from the site at Torpedo Bay in Devonport, Auckland.”
About the author
David Veart,right,born in Auckland, New Zealand, in 1950, is descended from an early Fencible family and currently lives on Auckland’s North Shore.

Trained as an anthropologist, he is Programme Manager, Historic, for the Department of Conservation for which he has also worked as a historian and archaeologist. He has an MA from The University of Auckland and is a member of the New Zealand Archaeological Association, the Auckland Heritage Committee of the Institute of Professional Engineers and has just been appointed to Auckland Council Heritage Advisory Panel. David Veart is an expert on geologically and archaeologically significant parts of the Auckland region such as Mangere Mountain, North Head and the islands of the Hauraki Gulf. He is well-known for his public guided walks of these areas, particularly, North Head and Motutapu Island, about which he has also narrated interpretative films and written film scripts –he is working on a new film script at present, Swords to Ploughshares, the Hauraki Gulf Marine Park.
David Veart has been fascinated by archaeology since reading a book on the treasures of Egypt as a child. He got his first practical experience during the late 1970s when he worked in London, England, as a volunteer on ancient Roman archaeological excavations. His new book brings together his passions for history, archaeology and education for children: Digging Up the Past: Archaeology for the Young and Curious, will be published in 2011 in the same hardback format as Auckland University Press’s other popular books for the “young and curious” such as Gregory O’Brien’s awardwinning books Welcome to the South Seas and Back and Beyond.
Digging Up the Past begins with human arrival and explores how people have learned how to live in Aotearoa/New Zealand, both Maori and Pakeha, in camps, quarries, mines and cities.
Veart says, “When I was a child, I thought of all archaeology as being associated with exotic locations like Egypt. Our place is just as exciting if we know how to look.”
David Veart’s first book First Catch Your Weka: A Story of New Zealand Cooking (AUP, 2008) was a finalist in the 2009 Montana NZ Book Awards. a finalist for the 2009 NZSA E H McCormick Award for Best First Book of Non-Fiction and is in its second printing.
First Catch Your Weka was inspired by another of his passions, his personal collection of over 500 recipes and cookbooks, started in the early 1970s after his mother gave him the essential Edmonds Cookery Book as he left home. He can often be found trying out recipes in his kitchen and presenting the results on dishes from his collection of ’60s and ’70s Crown Lynn china. He is currently helping organise a conference for the 5th New Zealand Food History Society Symposium to be held in Auckland in November 2011.
Posted by Beattie's Book Blog at 6:59 am