Why so few women in the London Review of Books?

I'm assured that the marginal exposure of women in an otherwise worthy journal is a 'complicated' question. Is it, really? 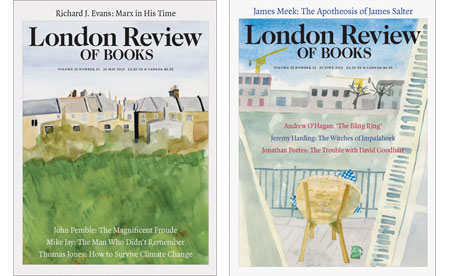 Find the lady ... two recent covers of the LRB trailing only male contributors

I emailed a nice man at the London Review of Books. My subscription had lapsed and I'd decided, quietly, not to renew.
Was there a reason I wasn't renewing? Well, now that you mention it, yes, there was a reason, absolutely. And since they were asking, I wrote back and told them.

The problem was the game my partner and I played every time a new edition arrived in our letter box. We call it Guess the Ladies. How many this week? I'd ask, trying not to sound jaded.
Four. Reviewers or reviewees? Both. Out of 20. Oh. So now I'm jaded.
You can play along at home if you happen to have a subscription to one of the UK's premier literary review journals. If not, you can review the contents online at your leisure.

Having been asked, I told them: the ridiculously low number of women who are represented in each edition of your otherwise worthy journal is, well, ridiculous. The reply: It's complicated, "as complicated as it gets". The response was genuine in its bafflement and its hand-wringing consternation, and ended by stating that the editors at the LRB were desperate to change the situation.
To which I replied: then change it.

And then I posted the exchange on my blog, where it was retweeted and picked up by Salon.com in the US. Many people responded with, "I've been thinking that for ages." We might be the only household where Guess the Ladies is played, but we're clearly not alone in our frustration with the gender balance of the LRB.
More
Posted by Beattie's Book Blog at 9:38 am