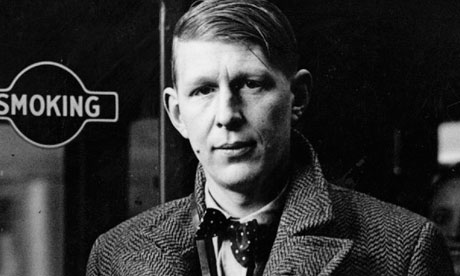 The poet as a young man… WH Auden in London in January 1938, 18 months before the recently unearthed diary was started. Photograph: Hulton Archive/Getty

"Such a beautiful evening and in an hour, they say, England will be at war," wrote WH Auden on 1 September 1939 in an unpublished diary that sheds light on the composition of one of his most famous poems.
The journal was one of just three kept by the British poet. It had been in private hands since Auden's death in 1973, but was recently unearthed and sold earlier this month at Christie's in London to the British Library for £47,475. Christie's called it "the most substantial and significant Auden manuscript to have been offered at auction", and said it offered "an incomparable insight into the poet's activities and reflections at the turning point in his life".

Auden wrote the journal between August and November 1939, shortly after he left England for America with the novelist Christopher Isherwood – a move heavily criticised as unpatriotic by the British media. But Auden's journal shows that, despite his absence, events in Europe were very much on his mind, said Helen Melody, curator of modern literary manuscripts at the British Library.

Auden's famous poem, September 1, 1939, opens "I sit in one of the dives / On Fifty-second Street / Uncertain and afraid / As the clever hopes expire / Of a low dishonest decade". On the same day in 1939 the poet wrote in his diary of how he "woke with a headache after a night of bad dreams in which C [Chester Kallman, the American poet] was unfaithful. Paper reports German attack on Poland … 6.0pm."

He tells of how Benjamin Britten and Peter Pears came to lunch, how "Peter sang B's new settings of Les Illuminations and some H Wolf … which made me cry. B played some of Tristan which seems particularly apposite today. Now I sit looking out over the river. Such a beautiful evening and in an hour, they say, England will be at war … 10.30 Went to the Dizzy Club. A whiff of the old sad life. I want. I want. Je ne m'occupe plus de cela. Stopped to listen to the news coming out of an expensive limousine."

War declared this morning… a page from the journal. Photograph: Christie's/PA

Two days later, on 3 September, Auden writes: "war declared this morning at 7am. Listened in the afternoon to a broadcast of the first 1½ acts of Tristan. Everyone very kind, some rather drunk. The frogs sang all night. We sang spirituals out on the lawn."
More
Posted by Beattie's Book Blog at 8:30 am