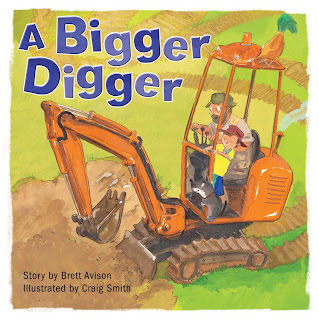 First time author scores international book deal!
Aucklander Brett Avison has always been able to tell a good story, but had never considered turning his talents into a book. Until one day, while watching his 3-year-old great-nephew Bryn playing with his digger 'the words just started to flow'. By the end of the day Brett had written a story- about Bryn, his dog Oscar, and what they found in the back yard. Unsure whether it was any good he turned to someone in the know - his wife Lorain Day, who at the time was publishing manager at HarperCollins Publishers NZ.
'I was nervous about reading it' remembers Lorain, ' in case I had to break the news to him it was unpublishable'. But she was very pleasantly surprised. Brett's talent for words had turned Bryn's fascination for diggers into a colourful, unputdownable adventure for boys.
The story was offered to international publisher Five Mile who realised it was pitched to exactly the market that has been missing out over the last few years - young boys. They offered Brett a two book-deal, with A Bigger Digger being published in Australia and New Zealand from April/May this year, and the next book, Stuck in the Mud, being published in time for Christmas.The book is also to be published in the UK.
File Mile paired up Brett's words with Australian children's book illustrator Craig Smith's sensational drawings, and the result is a book tailor-made for boys and their love of diggers, dogs - and tall stories.
Since 1983, Craig Smith's witty artwork has been enormously popular with children. His wonderful sense of the absurd and terrific eye for detail has brought this delightful story of two little adventurers and what they find in the backyard to life, with a parade of diggers and a big surprise at the end.
Posted by Beattie's Book Blog at 8:52 am

Good for you, Brett! That is truly great news. Looks like a change of career could be in the wind!

I heard about this book on RNZ, went to a book store, went onto 'Fishpond' but I cannot see where to purchase it - where is it available please?