THE AMATEUR SCIENCE OF LOVE 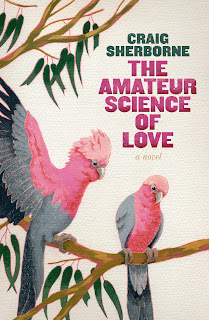 TEXT PUBLISHING * JUNE 2011 * P/B RRP $AU32.95/$NZ40 * & ebook
I notice in the NZ Listener out today that three of their eight pages devoted to books are given over to this debut novel (from an established poet, playwright, memoirist) due for publication this week. I went on to the publisher's website to see what all the fuss was about and this is what I found:
‘All women with lingering illusions about the way men think should read this fast-moving, sharply focused, fantasy-shattering little thunderclap of a book.’
Helen Garner
They say we fall in love. But really we fall in sickness. I lost appetite for food in those two nights with Tilda. My stomach was sunken in its wishbone cavity. Me, I was never sick, but I was sick now, the strangest sickness that made my eyes gleam green with excellent health. They had shiny white edges. My cheeks were glossed in a fresh oil of pink.
Colin dreams of escaping his parents’ New Zealand farm for a grand stage career. He makes it to London and a disastrous audition before meeting Tilda—beautiful Tilda, older, an artist—who brings his future with her.
A heady romance leads to a new home in a decaying former bank in a small town hours from Melbourne. They are building a life together—but there are cracks in the foundation.
This is a love story, told from passionate beginning to spectacular end. It is intimate and honest, blackly funny and emotionally devastating.
Craig Sherborne’s memoir Hoi Polloi was shortlisted for the Queensland and Victorian Premier’s Literary Awards. The follow-up, Muck, won the Queensland Literary Award for Non-fiction. Sherborne has also written two volumes of poetry, and his journalism and poetry have appeared in most of Australia’s leading literary journals and anthologies.
The Amateur Science of Love is his first novel.
PRAISE FOR CRAIG SHERBORNE’S MEMOIRS:
‘Gruesomely honest and very, very funny.’ Hilary Mantel
‘Mordantly true to life…one of the most interesting autobiographical projects on the go.’
J. M. Coetzee
‘He writes beautifully, especially when the material is not beautiful at all. He can make the cruel truth poetic.’ Clive James
‘One of the great Australian memoirs. Not since Hal Porter have we had an account of Australian childhood so scurrilous and unashamed.’ Peter Craven
‘This is writing of the first order, utterly controlled, utterly beautiful.’ Sydney Morning Herald
‘Craig Sherborne’s daring, innovative prose is as exhilarating as his disciplined mastery of it is humbling. In service to an unnervingly sharp intelligence, it enlivens us to the comedy, the pathos, the dignity and the pain of life, as his characters live it. Muck is a masterpiece.’ Raimond Gaita
About the author:
Craig Sherborne, a Melbourne based poet and playwright, was educated at Scots College in Sydney before attending drama school in London. He worked as a journalist for Melbourne based newspapers, was a senior writer with the Melbourne Sun, and is published in literary journals and anthologies. He lived in New Zealand on two occasions in his younger years and was a guest in 2008 at Writers and Readers Week at the NZ International Arts Festival in Wellington in 2008.

Methinks I had better read the book!
Posted by Beattie's Book Blog at 3:47 pm