Tales of Reading in Reintroducing a Color Device 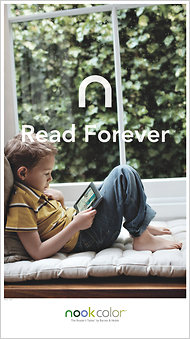 Make that Nook Color, the e-reading tablet that Barnes & Noble is hoping to reintroduce to consumers in an advertising campaign that begins on Monday.
In gently singsong language that evokes Dr. Seuss — sure enough, “The Cat in the Hat” makes a brief appearance later in the ad — a commercial makes a general pitch for reading as it depicts people, old and young, utterly absorbed in their books while the world goes on around them.
•
A series of dreamy sequences shows a dark-haired boy in a hoodie sweatshirt, reading in a park and blissfully paying no attention as two other boys and a dog noisily brush past him. A young girl sits cross-legged on a dining-room rug, a Nook in her lap, as she absentmindedly tucks a stray lock of hair behind her ear. A couple is stretched out in bed, locked in their own worlds, she with a Nook and he with a book. Four people sit, still as statues, reading, on the stairs of a public building as passers-by rush down the steps.
One print ad bears the tagline “Read Forever,” with a picture of a small boy curled up on a window seat gazing at the screen on his Nook.
The hopeful message? Reading is changing, but it’s not going away.
There are no Barnes & Noble stores in the ads, a nod to the transformation that is under way in the publishing industry. As e-books have taken off, foot traffic in brick-and-mortar stores has decreased, a sure sign that more consumers are doing their book-shopping from home. (Or wherever they and their e-readers happen to be at the moment.)
Barnes & Noble, which operates the nation’s largest chain of bookstores, is hoping many of those purchases will happen on the Nook Color, the $249 tablet that the company introduced last year as an addition to its original Nook, a black-and-white reader whose versions are currently priced at $149 and $199.
There are dozens of e-readers and tablets on the market, and many more are expected to arrive this year. But the most prominent players for devices that focus on reading e-books are Barnes & Noble and Amazon, with its popular Kindle.
Read the full piece at The New York Times.
Posted by Beattie's Book Blog at 6:08 am