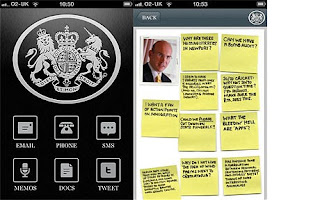 Faber's Malcolm Tucker: The Missing Phone app, launched last Christmas, has been nominated for a British Academy of Film and Television Arts (Bafta) award.
The app has made the shortlist of four in the New Media category, alongside Wallace and Gromit's World of Invention, Misfits and LabUK/Brain Test Britain.
Released in December last year, the app works on the premise that Malcolm Tucker, malcontent character of BBC political comedy series "The Thick of It", has lost his iPhone. It includes voice memos, emails and answer phone messages from other characters.

The nominated team includes Henry Volans, Faber head of digital publishing, as well as author Armando Iannucci, and Dave Addey and Henry Cooke of iPhone and iPad development company, Agant.
Volans said: "It's really thrilling. When we made this app we wanted to do more than translate a book to an app, but made something that made sense of the platform and I think this nomination shows we've gone some way to doing that.
"The thing that I am proud of is that this is the first time an app has been nominated for a TV Bafta, and I'm proud that this is coming from the book industry, when it could have come from anywhere else".
Originally priced £3.99, Volans said that, following today's nod, the price will now drop to £1.79.
The winner will be announced on 22nd May at the Bafta ceremony.
Posted by Beattie's Book Blog at 10:53 pm