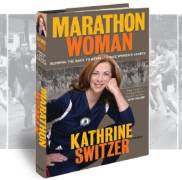 Kathrine Switzer hit the headlines back in 1967 when she became the first woman to run the Boston Marathon. When the race director found there was a woman in the field he tried to forcibly eject her but with the assistance of other runners she overcame the disruption and went on to finish the race. Now a very youthful sixty she continues to run daily although marathon days are over. She eventually ran in 35 marathons including winning the New York Marathon in 1974

Switzer is an inspiration and her handsome hardcover book is an inspiration too. In her retirement from marathon running she became an award winning tv sports commentator covering major running events at both Olympic & Commonwealth Games.

And of course she has a strong New Zealand connection being married to former Victoria University Professor of English, Roger Robinson, himself a pretty useful marathon runner. I notice the book is dedicated to Roger Robinson.”Rejoice, we conquer!”
And two of the photographs in the book show NZ marathon runner Lorraine Moller whose own book, On the Wings of Mercury” was published late last year. It is not surprising to read that Moller and Switzer are great friends.

Switzer was interviewed in the NZ Listener recently and you can read that interview here.
And she has a most comprehensive and interesting website which you can visit here.

Book distributed in NZ by Harper Collins.
Posted by Beattie's Book Blog at 7:41 am