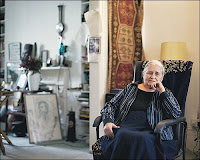 At 88, Doris Lessing is still raging - at communists, war, Mrs Thatcher, the 'bloody Swedes' who awarded her the Nobel Prize... but most of her venom is reserved for the subject of what she says will be her final book - her mother. She talks to Nigel Farndale. Portrait by Reme Campos

It takes Doris Lessing just four minutes to come out with something, if not actually controversial, then at least unexpected. It's about Hitler. She says she understands him. This from a former member of the Communist Party. (She left in 1956, the year of Khrushchev's speech to the 20th Congress, the one in which he denounced Stalin.) We are talking, I should explain, about Erich Maria Remarque, the author rades, they stand by each other. And as you read that you suddenly understand Hitler.

These arebut the opening paragraphs of a three page story from The Telegraph. A must-read for all Lessing fans.
Posted by Beattie's Book Blog at 9:07 am