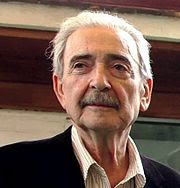 Argentine poet wins Spain's highest literary honour
Report from The Guardian:
Argentine poet Juan Gelman has received the Cervantes Prize, the Spanish-speaking world's highest literary honour.
Gelman, who receives 90,000 euros with the award, is considered Argentina's poet laureate. His prolific work addresses among other issues the pain of loss under military juntas that ruled his country in the 1970s and 80s.
Gelman's son and daughter-in-law were killed during the dictatorship. Gelman spent years tracking down a granddaughter born of that marriage and raised in adoption. The dictatorship also forced him into exile in Europe.

King Juan Carlos bestowed the Cervantes Prize medal on the 77-year-old poet at a
ceremony at the university in Alcalá de Henares, birthplace of Don
Quixote's author.
Posted by Beattie's Book Blog at 6:08 am