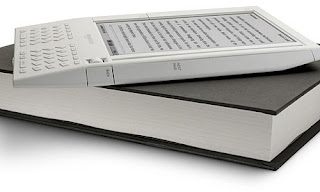 Kindle Report from Publishers Lunch
Buy Kindle, Love Jeff
Jeff Bezos's annual letter to shareholders is all about Kindle, casting the device as "exemplif[ying] our philosophy and long-term investment approach" as originally expressed in his 1997 letter (the year that Amazon jumped from $16 million in sales to to $148 million).
He observes: "We also knew we shouldn't try to copy every last feature of a book—we could never out-book the book. We’d have to add new capabilities—ones that could never be possible with a traditional book."
The early days of Amazon.com provide an analog. It was tempting back then to believe that an online bookstore should have all the features of a physical bookstore. I was asked about a particular feature dozens of times: 'How are you going to do electronic book signings?' Thirteen years later, we still haven't figured that one out! Instead of trying to duplicate physical bookstores, we’ve been inspired by them and worked to find things we could do in the new medium that could never be done in the old one. We don't have electronic book signings, and similarly we can't provide a comfortable spot to sip coffee and relax.
However, we can offer literally millions of titles, help with purchase decisions through customer reviews, and provide discovery features like 'customers who bought this item also bought.' The list of useful things that can be done only in the new medium is a long one."
Unlike WSJ columnist Lee Gomes, Bezos says "I value my BlackBerry—I'm convinced it makes me more productive--but I don’t want to read a three-hundred-page document on it." The most controversial bet expressed in the letter is that, while acknowledging electronic devices have generally "shifted us more toward information snacking, and I would argue toward shorter attention spans," Bezos believes little Kindle can reverse that trend. "We hope Kindle and its successors may gradually and incrementally move us over years into a world with longer spans of attention, providing a counterbalance to the recent proliferation of info-snacking tools. I realize my tone here tends toward the missionary, and I can assure you it's heartfelt." He adds, "I'll also point out that, while I'm convinced books are on the verge of being improved upon, Amazon has no sinecure as that agent. It will happen, but if we don't execute well, it will be done by others."
Posted by Beattie's Book Blog at 8:03 am