More than 100,000 people have signed a petition calling on the online retailer to 'pay their fair share of tax in the UK' 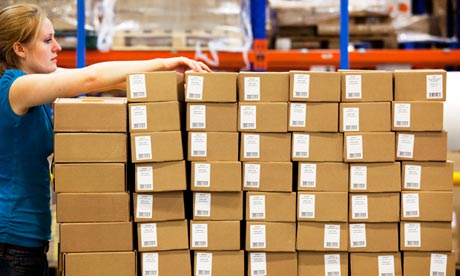 Piling up ... Amazon distribution centre outside Milton Keynes. Photograph: David Levene
More than 100,000 people have signed a petition launched by an independent bookseller calling on Amazon "to pay their fair share of tax in the UK" and warning the online retail giant that "the unfair advantage that your tax dodge gives you is endangering many UK high street businesses".
Booksellers Frances and Keith Smith, who count the MP Margaret Hodge and the author Charlie Higson among their supporters, are now planning to deliver their appeal to 10 Downing Street, accompanied by a large crowd of authors and other allies.
Hodge, chair of the public accounts committee, was one of the MPs to lay into Amazon over its tax affairs last year, when the online bookseller – alongside Starbucks and Google – was accused of diverting hundreds of millions of pounds in profits to tax havens.
"We never expected this, [but] when we've reached 100,000 we will present the petition to Number 10," said Frances Smith. "We've got to keep the pressure up so the government realises this is an issue close to people's hearts. We have to keep banging on about it so the government knows it is important to people, and that there are votes in it."

The Smiths, who run independent bookshops in Warwick and Kenilworth, launched their petition on Change.org on learning of the accusations against Amazon in November, and support has now hit a level they never foresaw. Calling on people to support their stance, the Smiths write in their petition that businesses like theirs have already been pushed "to the brink" by the huge discounts offered by online retailers, but that "what's even worse is that Amazon, despite making sales of £2.9bn in the UK last year, does not pay any UK corporation tax on the profits from those sales".

"It's not a level playing field and leaves independent retailers like us struggling to compete just because we do the right thing," say the Smiths. "As independent booksellers, we are happy with competition in the market but it must be on level terms and by dodging corporation tax in this way, Amazon start with an unfair advantage. As they grow bigger it's inevitable that shops like ours will be under even more pressure. That's bad for customers, bad for the high street and bad for the UK.

"Amazon may be obeying the letter of the law – but they're certainly not being fair. Last year Starbucks announced that they had caved to public pressure and would look at their tax affairs in the UK."