Influences and Inspiration – De Goldi, Farrell and Perkins.
Posted on July 29, 2010 by vicbooks

The NZ Book Council gathered together, under the watchful questions of Laura Kroetsch, three of NZ’s most accomplished and successful writers: Kate De Goldi, Fiona Farrell and Emily Perkins (pictured). 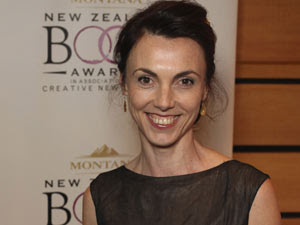 The cold night didn’t seem to discourage attendees, braving the conditions to bustle into the Adam Auditorium and listen to what turned out to be one of the best conversations on writing for a long time. Starting with the question, ‘Do you remember the moment you learned to read?’, the discussion traveled great distances, exploring some utterly fascinating writerly territory. It was almost a topographical exploration of the ways and means of inspiration and influence; a kind of literary orienteering.

The audience were treated to an intriguing, often funny and always fascinating session. From Fiona Farrell’s explicit memory of words first coagulating from squiggles to meaning before her eyes (‘Donuts’ said Robert, ‘for all of us.’) to Emily Perkins describing the impact and inspiration of physical space, be it a house, cathedral or art installation, on her writing process as “experiencing the familiar world, just twisted”.

It’s easy to imagine writers just sitting down and transcribing the book that exists, perfectly formed, in their head. So it’s comforting to hear of the travails of inspiration and the comfort of influence that helps the writing process. De Goldi, Farrell and Perkins spoke about the formation of their passion and how the logic of its expression is harnessed by their weaknesses as writers. “Everything grows out of your incapacities”, said De Goldi when describing building a story with skills refined by the need to compensate for undeveloped areas of technique. “The problem suggests the structure”, Farrell added. “Yes”, said de Goldi, “it’s engineering”. If that sounds a little mechanical then the essence of the conversation isn’t being conveyed well; the synergy of these three women was quite inspiring in itself, each one instilled the session with different degrees of the intellectual and emotional approach and response to inspiring influence.
Read the full piece at Vic Books
Posted by Beattie's Book Blog at 12:54 pm