Exploring the road home
Jose Borghino
From: The Australian - July 23, 2010 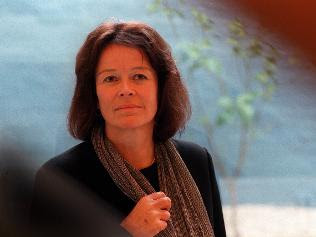 Hilary McPhee felt "repelled" by the values that had taken hold in Australia. Picture: Shaney Balcombe

ANTHOLOGIES have always been risky propositions, endangered species like their bastard cousins, the so-called "little magazines" that survive on the smell of a Literature Board grant and the saintly doggedness of the very few.
Now that the internet is messing with our reading habits so that we (supposedly) can't focus on long novels like we used to, maybe our attenuated attention spans and need for novelty will be a good thing for anthologies such as these - short texts by various hands with a vaguely unifying theme.
In the case of Wordlines, that theme is purely personal: these stories were chosen by Hilary McPhee. At the vanguard of literary publishing since the glory days of McPhee Gribble in the 1970s and 80s, she had a stint as chairwoman of the Australia Council in the 1990s and was briefly editor of the dearly departed online news site NewMatilda.com.

More recently, McPhee was out of the country for three years. As she explains in the introduction to Wordlines, much of that time was spent in the Middle East "doing mysterious things with books". Upon returning to Australia in 2009, however, McPhee felt disoriented and "repelled by the affluence, the food fetishism and the politics of spin" that had overrun her homeland.

As a way of regaining her bearings, McPhee began looking for Australian writing that was "international, engaged, political and was not expecting to find very much of it". To her surprise, she did. Wordlines is the result. McPhee mixes a sophisticated cocktail of new writers and old stalwarts. As an example of the former, the anthology opens with Nam Le's Cartagena from his multi-award winning collection of short stories, The Boat (2008). Set in a drug-infested barrio of the Colombian city of Medellin, it tells the story of Juan Pablo Merendez, a 14-year-old sicario, or hitman, who has killed "fourteen people for certain, and perhaps another two".
Unrelenting in its depiction of violence, but with a romance, idealism and even innocence that constantly reminds us that Juan Pablo and his gang are mere children, Le's prose maintains an intensity and an authenticity that would be noteworthy from a Colombian or an Hispanic writer. From a 30-year-old Vietnamese-Australian, it is astonishing. Reading Cartagena is like watching a (great) Tarantino movie.


Full story at The Australian.
Posted by Beattie's Book Blog at 6:35 am