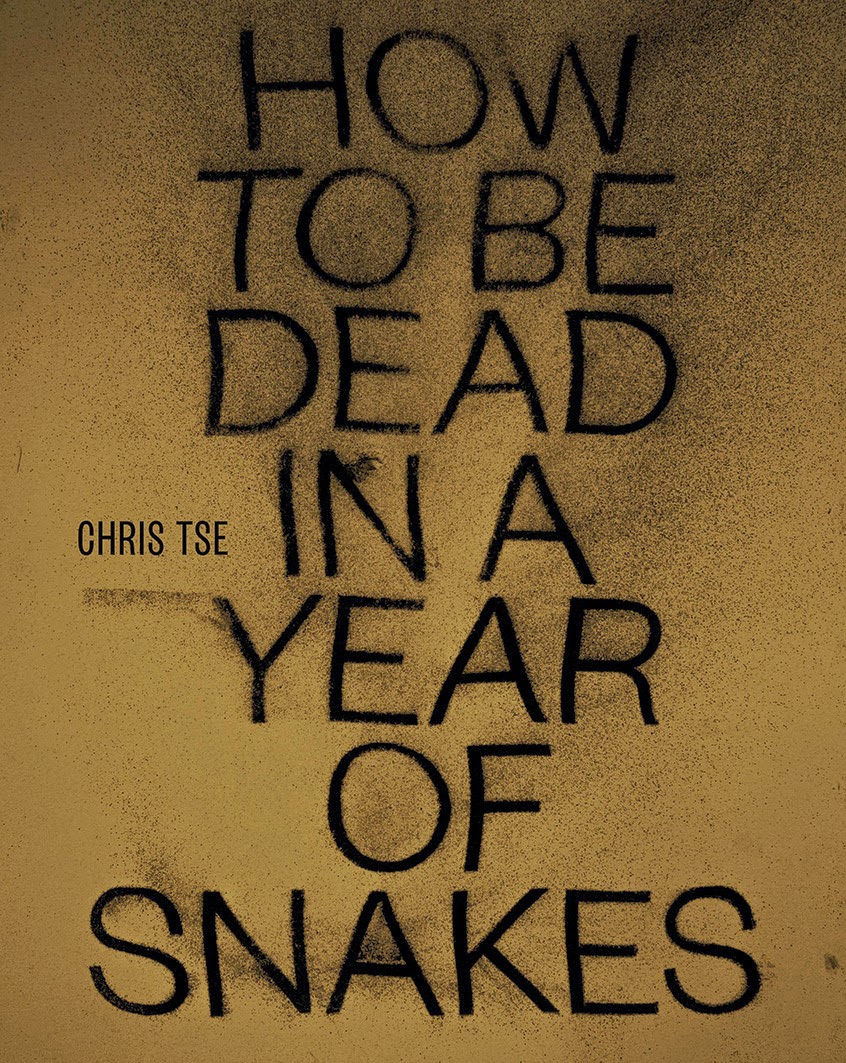 How to be Dead in a Year of Snakes
Chris Tse
Auckland University Press
$24.99

Wellington writer, actor and musician, Chris Tse offers an impressive historical drama in his first full poetry collection, How to be Dead in a Year of Snakes (Auckland University Press). Tse is an exciting voice, one who has already showcased his talents in such publications as AUP New Poets 4. For this new book, Tse takes the 1905 racist-motivated murder of Cantonese migrant Joe Kum Yung by white supremacist Lionel Terry as the terrain of his work:

(In which the author interviews a dead man)

No one asked me to speak, nor took the time to fill a moment with my
presence. We cannot hide from ourselves in the dark. I crouch down
in the damp void and listen as they pass words about me between
themselves like borrowed scandal. The loudest, hungriest voices drown
out all reason…

For years I lit incense and prayed for my share of good fortune, holding
fast to the belief that patience brings luck to those who traverse life’s
terrain with humble expectations. Now such a dispensation numbs me.

I often thought about the things I left behind, how the distance that once
indulged me slowly smothered the dreams of those I made promises
to. How my wife waited, how my bad luck clung to me like a wandering
ghost. We are all losers in a stoic game. Unkind or unsettled, it made no
difference in the long run; I took it all like a prize fool…

Journeying in time from 1871 to 1905 and beyond, in landscape between Canton, the Hokianga, Wellington and a spiritual after-life, this is an ambitious collection, its poems akin to chapters of an expansive novel. Yet, in the best traditions of poetry, what it imbues its subject matter with (which prose never could) is music, language play, heightened (rather than understated) emotion, theatre and meditation; as the titular poem capably illustrates:

(How to be dead in a year of snakes)

There must always be
a first victim.

Maybe not the very first,
but the one that shocks.

The one that says: hey, look.
The one we can’t let go.

The theatre in this work is never theatrical. Rather, connected to poetry’s ability to play out in the mind as a series of images/ mental pictures, performance, play and tragedy are sustained by Tse’s ability to dress the different stages his plot unfolds upon with precise details and les mots justes:

drowned by the pitter-patter
footsteps of those running to help.

Another cold Wellington night
wind on a sharp loop.

Traces of cordite
punctuate the chaos.

His stiff clothes refuse to move
as they lift his body

Navigating both a turbulent and traumatic era in New Zealand’s history, one
which symbolizes our inharmonious cultural past, and a story which displays a rich, distinctive New Zealand literary voice, that connected to the heritage and narratives held by our Asian New Zealand authors, Chris Tse’ How to be Dead in a Year of Snakes is a welcome and accomplished poetic publication. Another must-read in a year when the NZ poetry scene has seen a plethora of amazing poetry publications.

From a first-time author to a well-established writer with the release of Ngati Porou, Te Whanau-a-Apanui and Ngati Ruanui writer Apirana Taylor’s latest collection, the breathing tree (Canterbury University Press). Taylor’s last collection was published five years ago, and the breathing tree, a body of 40 new works, is well worth the wait, as the first poem in the book exemplifies:

As with Tse’s work, the importance, the value of ‘voice’, of a distinctive poetic style is undeniable and evocative when considering Taylor’s oeuvre. Whereas Tse spoke to significant historical events and issues, Taylor’s focus is the mythological and ecological, the subject matter no less culturally important for that:

I adore Taylor’s literary compression, his ability to condense emotion and topic down to a form which comes close, often, to an extended haiku.  Even when he writes longer poems in the breathing tree, the use of language is no less sparse:

from flax and feathers
the cloak is woven

stories unfold
from the sacred knowledge

from the wairua of those who know
mauri ora mauri mate

how the song sings in the wind

Musically adept, the poems in the breathing tree intone their melodies to the reader, enfolding them, 40 times over, with a plentiful harmony of expression, impression and sensation.

The second collection, The Lonely Nude (Victoria University Press) by Hawke’s Bay writer, Emily Dobson returns the author to a moment from her past: her time spent as a life-model. It is this – the concept of being naked, fully exposed before artists – that inspires and influences the poems in the book, becoming, indeed, the mantle upon which  the collection’s final poem rests:

The lonely nude, I

Buck naked
I am standing
on the flattening sole
of one foot.
It’s nothing
but blue sky
and a soft bottom
in the plain light of day.
I smile like a madonna.
I am nothing like a boulder.

Upon this central theme so much about human interaction is examined by Dobson. So that self restrain becomes the modus operandi for the poem ‘Life model’; another verse, ‘Nude’ is predicated upon the notion of being “transfixed, to see your self: created, drawn, many times over”; and a further poem, ‘Notes: Paradoxical Undressing (hypothermia)’ examines exposure which motivates such strident authorial counsel as “Declare yourself, unfold yourself, reveal yourself.”

The politics of the body, its representation, its interactions and disconnections: these become the topics The Lonely Nude examines, sometimes in an imaginative, imagistic manner:

Joke: What can be held without touching?

Or was it the sunlight
on concrete?

The whole thing
was bright with guilt.

We sat quietly side by side
eating thin slices of rock melon.
Answer: A conversation

And sometimes in a gendered way:

The woman who used to be an oboe

now didn’t know what she was.
Mason wasps began nesting in her spine.

She defined herself by her regret
for the beautiful sound she had once made.

And sometimes in an atmospheric, emotional, familial way:

Mapped
(for my mother)

You acquired a heavy collection of maps and sat there
at rock bottom over your work, saying her name like a river.

I borrowed your boots to walk to market – everywhere I went
flocks of small birds were bursting into the sky above me.

I sent you on your way with instructions, an untidy map
and some food, but still you got lost on the return home ….

Most creative and impressive of all is the structure which sections the book into seven short parts, a journey through geography as much as through arrangement for each part tracks the protagonist’s voyage around the globe: Mexico, America, home… Just as the narrator finds her (poetic) feet in on locale she’s whisked or whisks herself away to a new terrain; such dislocation a metaphor for the symbolic and thematic landscape of the book.

Siobhan Harvey is the author of, Cloudboy (OUP, 2014) and, as co-editor, Essential New Zealand Poems (Penguin Random House NZ) .Her creative nonfiction has been selected as highly commended in 2013 Landfall Essay Prize and runner up in 2011 Landfall Essay Competition, and published in Landfall, Segue (Miami University Press) and Pilgrimage (Colorado State University Press).
This year she was runner up in the New Zealand Poetry Society's International Poetry Competition. Additionally, she was winner of the 2013 Kathleen Grattan Award for Poetry, runner up in 2012 Dorothy Porter Poetry Prize (Aus) and 2012 Kevin Ireland Poetry Competition. Between 2006 and 2013 she co-ordinated New Zealand's National Poetry Day. She lectures in Creative Writing at AUT'S Centre for Creative Writing, and has a Poet's Page on The Poetry Archive (UK), co directed by Sir Andrew Motion.
Siobhan is the regular poetry reviewer on this blog.
Posted by Beattie's Book Blog at 7:50 pm