Special Deluxe: A Memoir of Life and Cars – Neil Young 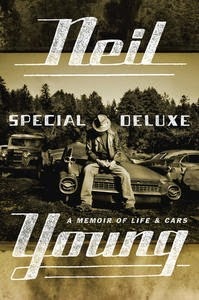 Neil Young's first memoir, Waging Heavy Peace, was an international bestseller and critical success.  The Independent wrote that 'You don't want it to end.  You see rock and roll history from the inside out', while the Guardian found it 'the perfect literary counterpart to the fifty-year career it describes'.
Now, in Special Deluxe, Young has fashioned a second work of extraordinary reminiscences about his Canadian boyhood, his musical influences, his family, the rock 'n' roll life, and one of his deepest, most ebullient passions: cars.  Through the framework of the many vehicles he's collected and driven, Young explores his love for the well-crafted vintage automobile, and examines his newfound awareness of his hobby's negative environmental impact.  With his ferocious devotion to clean energy, he recounts the sage of Lincvolt, his specially modified electric car, and his efforts to demonstrate to lawmakers and consumers how viable non-gas-guzzling vehicles truly can be.
Special Deluxe captures Young's singular lyrical, almost musical, voice.  Witty, eclectic and wonderfully candid, Special Deluxe is an unforgettable amalgam of memories, thoughts on music, and political ponderings from one of the most genuine and enigmatic artists of our time.
14 October 2014 | $55.00 | Hardback | Viking | Penguin Group (NZ)


And on the Sky Arts Channel for Neil Young fans: