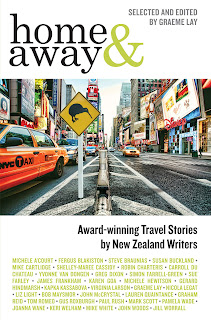 This appealing collection of stories is being launched in Auckland this evening.
I caught up with Graeme Lay over the past weekend and put some questions to him.

Graeme This book is co-published by New Holland Publishers and Travcom. We know New Holland of course but can you tell us something about Travcom?

Travcom - short for 'New Zealand Travel Communicators' - was founded in 1991, by Auckland journalists Susan Buckland, Jill Malcom and Gordon McLauchlan.The aim of the organisation was to raise the standard of New Zealand travel writing and to recognise through an annual competition - the Travel Media Awards - the year's best travel stories and photography. The publication of this anthology - Hone & Away - marks the twentieth year of Travcom's annual awards.

How did you go about making your selection?

There were 108 submissions and the thirty-five stories I chose for the anthology were selected according to whether they provided me with a powerful impression of the place being written about. The stories had to be evocative and free of the cliches which mar much travel writing. They also had to contain interesting characters and meaningful encounters with them.

You of course have edited a number of collections of NZ short stories. How did this book differ from your previous titles?

Because travel stories are factual i.e. non-fiction, they were not products of the writers' imagination and so are not 'short stories' in the literary sense. However the best contributions did contain a compelling narrative, intriguing characters and elements of conflict, so in those respects they were not dissimilar to literary short stories.

I notice many well-known names among the writers you have selected.

Yes, many leading New Zealand journalists and editors are among the contributors, including writers who have won Travcom's 'Travel Writer of the Year Award,' in a couple of cases more than once. It's a very impressive line-up.

What makes a good travel story?

It mattered little to me whether the destination being written about was the Chatham Islands or Guatemala, Hamilton or Berlin, the criteria for inclusion in the book were the same: I had to be transported vicariously to the place being written about through the quality of the writing, I had to learn something interesting about the place, and I had to share the writer's pleasure (and sometimes displeasure) with the people he or she encountered along the way. Humorous elements were always appreciated, too. I looked, above all, for travel stories which were the antithesis of boring, and I found thirty-five of them.

Graeme Lay is the author of three collections of travel writing, as well as several novels for adults and young adults and four collections of short stories. He has travelled widely  especially in the Pacific.
Posted by Beattie's Book Blog at 6:39 am