Gorse is Not People 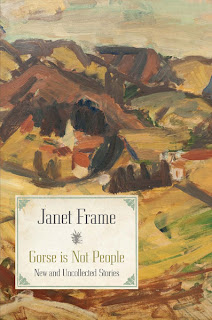 This brand new collection of 28 short stories by Janet Frame spans the length of her career and contains some of the best she wrote. None of these stories has been published in a collection before, and more than half are published for the first time in Gorse is Not People.

The title story caused Frame a setback in 1954, when Charles Brasch rejected it for publication in Landfall and, along with others for one reason or other, deliberately remained unpublished during her lifetime. Previously published pieces have appeared in Harper's Bazaar, the NZ Listener, the New Zealand School Journal, Landfall and The New Yorker over the years, and one otherwise unpublished piece, 'The Gravy Boat', was read aloud by Frame for a radio broadcast in 1953.

I must say Penguin Books has done the memory of Janet Frame proud with this publication.It is a beautifully designed, (Anna Egan-Reid), handsome hardback and is a lovely thing to behold.