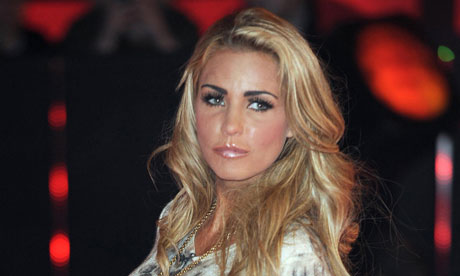 Phone hacking: the publisher of Katie Price's autobiography has been told by police he may have been targeted. Photograph: Anthony Devlin/PA
The police investigation into phone hacking by the News of the World has now spread to the publishing world, with a high-profile agent and a celebrity book publisher targeted.
Peter Cox, who worked with the late Linda McCartney, and John Blake, who has worked with Katie Price and Jade Goody, have each been told by the police that they appear to have been targeted by illegal surveillance.
Cox told the Guardian he was "stunned" to learn from the Metropolitan police's Operation Weeting that someone had been eavesdropping on him: "It's a little like coming home to find your place has been burgled, the same sort of feeling, invasion of privacy. Unless it's actually happened to you, it's difficult to explain."
Angered by what he describes as a "violation", he added: "I'm quite interested in suing the hell out of them." Both men regularly worked on high-profile books. One project was particularly sensitive because it involved royalty, a source revealed.
Full story at The Guardian.
Posted by Beattie's Book Blog at 5:54 am