Over the last few days buyers for bookstores around the country have opened their e-mail to find a mysterious last-minute addition to the Little, Brown & Company fall lineup.

Bernard L. Madoff, (Louis Lanzano/Associated Press)who might be the topic of an untitled book to be released by Little, Brown & Company this fall. 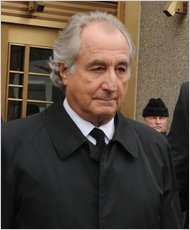 “Untitled,” by Anonymous, was described as a 320-page, nonfiction, hardcover book with photos that will retail at $26.99. Order the book now, the publisher said, to ensure delivery by its November release date.
It is, the e-mail said, “the inside story of life with one of the most controversial figures of our time.”
On Wednesday book buyers remained in the dark about the identity of the author or the “controversial” subject, and Little, Brown has given tantalizingly few clues.
In its e-mail the publisher promised a “massive media rollout” with a confirmed “60 Minutes” appearance. Bookstores were instructed to comply with a highly orchestrated release on Nov. 14, with no sales permitted until then, an embargo arrangement typically reserved for splashy debuts of political memoirs or Bob Woodward books.
“There’s nothing to guess with,” said Mark LaFramboise, a buyer for Politics and Prose, an independent store in Washington. “I can’t even get mad at it, I just think it’s so funny.”
Full story at New York Times.
Posted by Beattie's Book Blog at 9:28 pm