A Dictionary of Kiwi Slang for the New Millennium

- some old, some new, some borrowed, often blue. 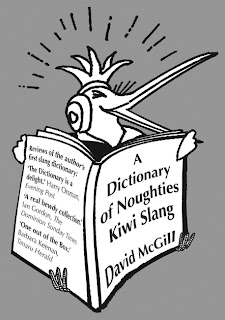 This collection presents active slang, catchphrases and colloquialisms in Kiwi use in the first decade of the new century. In time for the Rugby World Cup, it includes dozens of examples of our rugby culture from
Australian haka, The Boot and The Old Father Christmas Hold to No Pads, No Helmets, Just Balls, Rugby Union Foreplay, and White Line Fever.
Faster than a speeding bullet, slang arrives, like bikoi and boy racer, codgerati and skywaka, honkyori and Hobbitocracy, Remuera Attack Vehicle and Tupperwaka, manus and munted, the last new to Mayor Bob Parker in the Christchurch February earthquake, next month he is briefing Prince William on this local slang. Fleeting vogue words help define the decade, notably Tigertigerumu,  Helengrad, Corngate and Paintergate.  Hanging in are golden oldies like a box of fluffy ducks, bandicooting, up the boohai and underground mutton. An appendix lists goneburgers like komaty, Py korry, Porirua briefcase and Wanganella weather.
This is the first Internet-driven, Google-tested collection of Kiwi slang, 3000 entries and explanations of slang that is distinctively Kiwi or particularly popular with New Zealanders. RRP $24.95. PUBLICATION 1 August
After publishing five best-selling collections of Kiwi slang over two decades, David McGill steps up with the king hits of Noughties Kiwi word play, including some of the Internet slang like TLDNR and WDOML.


David McGill Books.
Posted by Beattie's Book Blog at 1:18 am