Whitcoulls owner gets waiver for breaches 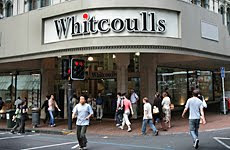 Redgroup Retail, the owner of the Whitcoulls and Borders book stores, gained a waiver for breaches to its banking covenants and said chairman Rod Walker will step down.
The Pacific Equity Partners-owned book, stationery and entertainment company, based in Melbourne, said it is exploring a range of options to strengthen its balance sheet longer term.

Last month the company forecast earnings before interest, tax, depreciation and amortisation (ebitda) of about $25 million for the 12 months ended August 28, against which interest payments of approximately $9 million were due, which would have put it in breach of two out of three banking covenants.

It cited a tough trading environment, particularly in Australia, in the last quarter of its financial year
Full story at TVNZ.
Posted by Beattie's Book Blog at 9:53 pm