Guardian first book award longlist ranges around the worldTen titles contend for £10,000 award, with subjects covered including everything from the itinerant experience of the Somali community to Churchill's 'black dog' 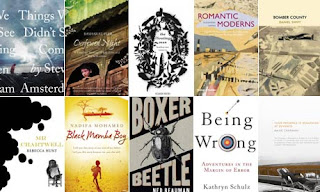 
The past vies with the future and poetry with prose on the longlist of the 2010 Guardian first book award, which was announced today. The 10 debut titles in the running for the £10,000 award range from dystopian fiction to popular psychology, and span the globe from Somalia to Finland, Kashmir to Winston Churchill's family home in Kent.

War stalks the pages of the best-known novel on the list, Nadifa Mohamed's Black Mamba Boy, which was longlisted for the Orange prize and has already won the 2010 Betty Trask award. Mohamed takes the story of her father, who left Somalia as a boy and settled in the UK after crossing Africa, and transforms it into fiction inflected by the African tradition of praise poetry. Starting as a 10-year-old boy in 1930s Somalia and journeying through Djibouti, Eritrea, Sudan and Egypt to freedom in Britain, Mohamed's main character witnesses key moments in the African experience of the second world war and embodies the itinerant experience of the Somali community.

According to the chair of the judges, the Guardian's literary editor Claire Armitstead, Mohamed is just one of a group of young British authors on the longlist who are expanding the territory of the novel.

Full commentary at The Guardian.

Poetry
The Floating Man by Katharine Towers (Picador)
Posted by Beattie's Book Blog at 8:38 am