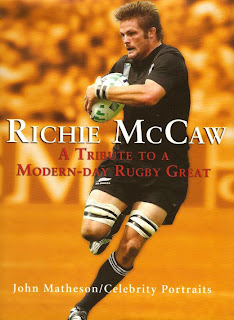 Caring dads who get involved with their children’s reading are being rewarded this week with a great Kiwi read of their own to enjoy.

The 547 schools involved in the Duffy Books in Homes programme are holding special Scholastic Caught Being a Good Dad assemblies to recognise that dads have a huge influence on the reading habits of their kids.

This year, schools will pick one special dad or father figure and honour them with a certificate and book presented at a school assembly.

This year’s award, sponsored by Scholastic New Zealand, is Richie McCaw: A Tribute to a Modern-Day Rugby Great by John Matheson.

Duffy Books in Homes General Manager, Linda Vagana, says “I think a lot of people don’t realise that dads are often the first and greatest role models that children have. We think this is something worth recognising.”

Schools choose their dad in many different ways. Some hold story writing competitions while others might put it to a school-wide vote.

Since the official launch in 1995 with 80 schools, 16,000 students and 14 sponsors, the Duffy Books in Homes programme has grown to encompass 547 schools, around 100,000 students and 198 sponsors in 2010. More than seven million books have been distributed to children in low-decile schools since the programme’s inception and August 24th marked the 15th anniversary of its launch.
Posted by Beattie's Book Blog at 12:35 pm