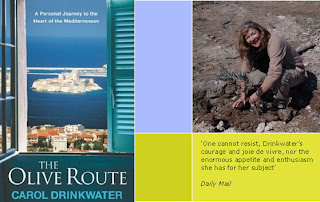 This is the fourth book in a series from this author who really has a theme going. Her three previous titles were:
The Olive Farm 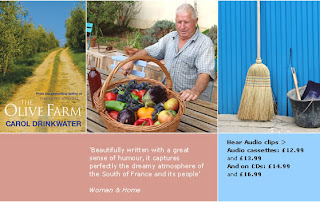 The Olive Season
The Olive Harvest
They are of course her memoirs and have sold hugely around the world.
Like the Silk Road and the Spice Route, the Olive Route – stretching 2,200 miles from Gibraltar to northern Syria – encompasses not just a journey, but an epic adventure involving the age-old transportation of a precious commodity.
The author travelled along this beautiful and sometimes dangerous route, uncovering ancient stories, meeting striking and courageous people and tracing its venerable olive culture. Tracking the Cretans, Phoenicians, Greeks and the Romans, amongst others, she eventually finds her way back to her olive farm in the sun-baked hills of southern France.
The Olive Route recounts a thrilling, heroic, sensual and entertaining journey and nicely concludes the much loved Olive series. 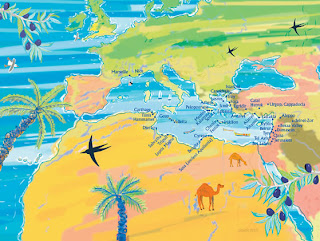 Carol Drinkwater's current project is working with UNESCO to help found an Olive Heritage Trail around the Mediterranean. Their lofty aim is to create peace within the region and honour the heritage of thiss acred tree. Bookman Beattie wishes UNESCO and Carol every sucess, what a great aim ,if anything can bring peace to that region then it is probably the olive.

You can read more about the author and her books on her attractive website.
As an aside I should mention that the author is probably best known for her role as Helen Herriot in the BBC TV series All Creatures Great & Small. but she has had a long & distinguished career as both actor & writer and she is high on my list of people with whom I would like to have dinner!
Posted by Beattie's Book Blog at 4:48 pm