As it unveils the latest in its line of smart devices, the tech company faces a growing number of challengers 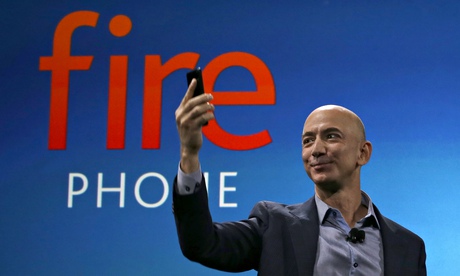 Jeff Bezos launches the Fire Phone in Seattle, the new Amazon smartphone which was described as a 'crazy initiative' by one analyst. Photograph: Ted S. Warren/AP

The list of household names – Blackberry, Nokia, HTC, Motorola – that have almost bankrupted themselves trying to make a hit smartphone is long, but this week Amazon became the latest tech company to take on the challenge.

Jeff Bezos stepped on stage in Seattle on Wednesday to unveil his Fire Phone. With his mother in the audience, he presented the latest in a line-up of smart devices that already includes the Kindle Fire tablet and a Fire TV box. With a 3D screen, a scanner that will recognise – and try to sell you – anything from cereal bars to songs, and unlimited cloud storage for photos, Amazon's smartphone is a technology light year away from its first black and white e-reader. However, few expect it to take sales away from the two brands that now dominate mobile: Apple and Samsung
More.
Posted by Beattie's Book Blog at 12:50 pm