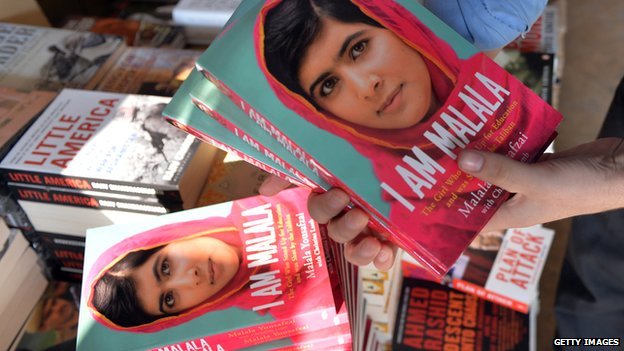 An event in north-west Pakistan to launch activist Malala Yousafzai's memoir was cancelled after pressure from local officials, organisers say.

Tuesday's book launch in Peshawar could not go ahead after "direct intervention by the provincial government", Dr Khadim Hussain told BBC Urdu.
Police and provincial officials said it was halted over security concerns.

But Imran Khan, whose PTI party runs the province, said he was at a loss to understand the decision.
On Tuesday morning the former cricketer tweeted: "am at a loss 2 understand why Malala's book launch stopped in Peshawar. PTI believes in freedom of speech/debate, not censorship of ideas".
Mr Khan's PTI party heads the government of Khyber Pakhtunkhwa (KP) province of which Peshawar is the capital.
Political pressure?

Malala Yousafzai was 14 years old when she was shot in the head by the Taliban in the north-western Swat valley in October 2012 because of her campaign to promote girls' education.
She and her family now live in the British city of Birmingham where she has been receiving treatment. She was not expected to attend the launch.
Malala has described the memoir, I am Malala, as her own story - and that of millions of others denied the chance to go to school.

The book launch had been organised by Peshawar University's Area Study Centre in collaboration with the Bacha Khan Education Trust (BKET), a non-profit education network set up by the secular Pashtun ANP party, and a civil society NGO called Strengthening Participatory Organisation (SPO).
Dr Hussain of BKET said that police had informed organisers they could not provide security for the programme. But he added that political pressure had also been put on the university administration to suspend the event.
"Two ministers of the KP government put pressure on the university administration to call off the programme. Some important state functionaries also made telephone calls to senior professors of the Area Study Centre," he told BBC Urdu.
Peshawar's police chief Ijaz Khan told the BBC that the book launch was stopped "due to security concerns".

He added that the centre had not provided any information to the police about the programme, which meant that arranging security in such a short time was not possible.
"Also, the university administration itself had voiced some reservations over Area Study Centre's plans for the book launch, after which permission for the programme was withheld," he said.
Khyber Pakhtunkhwa Information Minister Shah Farman told the AFP news agency that the local government had indeed halted the ceremony.

And at The Daily Beast
Posted by Beattie's Book Blog at 6:42 am