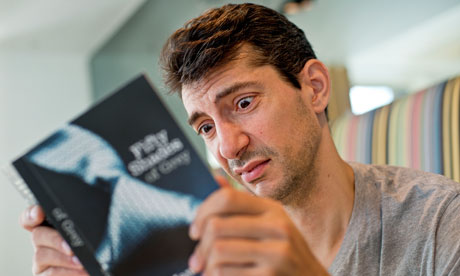 E.L. James helped show that the big publishers' model for grabbing readers' attentions is broken. Recruiting famous authors, or those with an existing audience is one strategy - but that can't work for all types of books. Photograph: Sarah Lee for the Guardian

Earlier this month, Random House UK published a short video featuring some of its biggest authors. Lee Child, EL James, Ian McEwan and Kathy Reichs lined up for the video and spoke eloquently about their pride in being part of Random House and what a good service it offered. Keen industry watchers may have detected another motive behind the film, though: was it an opportunity to remind the world that "big publishing" matters? After all, Amazon's Kindle and, to a lesser extent, Apple, Kobo, Smash-Words and other self-publishing platforms have cut the ties that shackled authors to big-name publishers by providing them with a direct route to readers. Self-publishing success stories have been widely reported and, though significant financial returns are still rare, more and more would-be writers are embracing the opportunities these platforms offer. But the truth is that the emergence of self-publishing does not announce the death of big publishing at all. Rather major houses' willingness to take these authors on indicates a much deeper problem in the industry and one that really does threaten its future.

You used to be able to spot vanity-published books a mile off: cheap paper, appalling cover art and clumsy text setting (the pages were so jumbled and badly set it was as if the words themselves were embarrassed to be there). Ebooks changed that in a stroke. On black and white epaper the visual differences between professionally published and self-published books vanished. Add to this the freedom to price aggressively, and some writers found a willing audience.

But publishers aren't as backward-looking as they can seem. Once someone dragged their attention to this audience, the industry started to search for and publish books targeted at these readers, be they new commissions, back-list books or self-published works. Fifty Shades was the standard bearer for a slew of erotic books that found a willing readership. When crime writer Kerry Wilkinson wrote the first book in his Jessica Daniels series, he didn't look for a publisher, he uploaded his book to Amazon and let the book find an audience. At the end of 2011 he had self-published three books and sold more than 250,000 copies. In February 2012 Pan Macmillan offered him a six-book deal.

The pull of successful self-published authors is that they have built an audience that can be developed. It's a way of outsourcing discoverability that is becoming increasingly common. Rather than nurturing an author, publishers want authors who already have an identifiable audience in place. They call it a "platform".
In genre fiction this is incredibly hard to get and so signing authors who have already done the ground work in the first place can be a very efficient form of publishing

Rad the rest
Posted by Beattie's Book Blog at 6:05 am