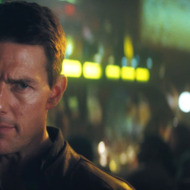 In September, upon publication of A Wanted Man, the latest Lee Child novel starring his ex-military cop hero Jack Reacher, Vulture went back and re-read each of Child's novels to single out all of the ways in which Reacher puts a hurtin' on the bad guys. This weekend, Jack Reacher, starring Tom Cruise and based on the novel One Shot, hits theaters. We revisit that comprehensive list, which you can find here.
For a little taste, here's all the ways in which Reacher kicks ass in One Shot:

Reacher hits someone in the face with his shoulder; kicks someone in the groin; throws a head butt; smashes his elbow square into a jaw; hits someone from behind twice; kills a man by throwing a knife into the back of his neck; stabs a dude in the throat and then breaks his neck; crushes a man to death in a massive bear hug; throws someone out of a window.