JM Coetzee and Paul Auster letters to be published next spring 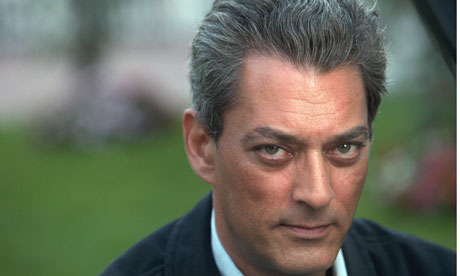 Men of letters … Correspondence between Paul Auster, above, and JM Coetzee is billed as offering an intimate portrait of the two authors. Photograph: Eric Robert

An exchange of letters between JM Coetzee and Paul Auster, delving into everything from fatherhood to philosophy, will be published next summer.


The two acclaimed authors – the South African Coetzee won the Nobel prize in 2003, while Auster has been inducted into the American Academy of Arts and Letters – had been fans of each other's writing for years, but only met for the first time in February 2008. Shortly afterwards, Coetzee wrote to Auster, suggesting they begin a regular correspondence, and, "God willing, strike sparks off each other."

Out next May, Here and Now is a record of an "epistolatory dialogue between two great writers who became great friends", according to publisher Faber. Covering three years of letter writing, the authors – Auster living in Brooklyn, New York, and Coetzee in Australia – cover topics including sports, film festivals, incest, politics, the financial crisis, family, art, marriage, friendship and love. "Their correspondence offers an intimate and often amusing portrait of these two men as they explore the complexities of the here and now and is a reflection of two sharp intellects whose pleasure in each other's friendship is apparent on every page," said Faber.


Here and Now follows last year's well-received publication of a letter exchange between the French novelist Michel Houellebecq and the French philosopher Bernard-Henri Lévy. "Everything separates us from one another, with the exception of one fundamental point: we're both utterly despicable individuals," wrote Houellebecq to Lévy. Tim Adams in the Observer called it a "strangely compulsive, wildly self-absorbed exchange" and "an exceptional, and enjoyable" addition to the French "tradition of memorable after-dinner conversation". He added that it was "hard to imagine a British equivalent – who would we end up with? Irvine Welsh and Alain de Botton?"


Julian Loose, non-fiction publisher at Faber, said the Auster/Coetzee correspondence was "a wonderful testament" to the authors' friendship. "Sharing this rich exchange of thoughts and memories and opinions between Paul Auster and JM Coetzee – two great writers at the height of their powers - is an extraordinary and intimate experience for the reader, and Faber and Harvill Secker have come together in something of the same collaborative spirit to publish [it]," he said.


From the New York Trilogy to Man in the Dark, Auster's award-winning writing has been translated into more than 30 languages. Coetzee has won the Booker prize twice – the first author ever to do so – for the novels The Life and Times of Michael K, and Disgrace.
Posted by Beattie's Book Blog at 7:51 am