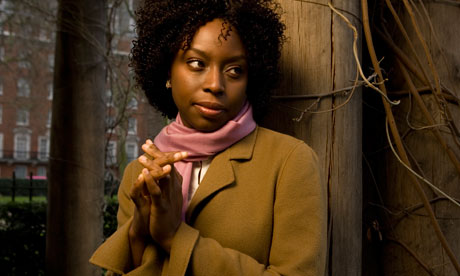 Long-awaited: Chimamanda Ngozi Adichie's new novel, Americanah, comes six years after she won the Orange prize with Half of a Yellow Sun. Photograph: Richard Saker for the Observer

It is six years since JM Coetzee's last novel, a long pause by the South African-born Nobel laureate's standards. The Childhood of Jesus (Harvill Secker, Mar) is the semi-mythical tale of a young refugee encountering new worlds and the obstacles of officialdom; written with all of Coetzee's penetrating rigour, it will be an early contender for an unprecedented third Booker prize for the author of Disgrace.
There are more migrants in search of promised lands in Chimamanda Ngozi Adichie's Americanah (Fourth Estate, April), which follows teenage lovers from the author's native Nigeria as they try to make a new life together but are separated by the forces of homeland security. Adichie won the 2007 Orange prize for her Half of a Yellow Sun; this is her first novel since then.
Equally anticipated is any new fiction from Claire Messud, whose wonderful The Emperor's Children was the most haunting of all post-9/11 books. She returns with The Woman Upstairs (Virago, May), a novel of Massachussetts, where she now lives, about a teacher in mid-life who looks for transcendence in the art she makes in secret.
Rachel Joyce made the 2012 Booker shortlist with her surprise bestselling debut, The Unlikely Pilgrimage of Harold Fry. Her second novel, Perfect (Doubleday, July), is another lyrical meditation on the workings of fate, as two young boys marked by the same catastrophic event follow very different paths through life.
Patrick McGrath grew up in Broadmoor hospital, where his father was director, and he has mined a particular fiction of psycholgical extremes in books such as Trauma and Asylum. His new novel, Constance (Bloomsbury, May), watches a literary marriage unravel as the past returns to haunt it.

There haven't been that many mother and daughter fiction double acts, but this spring the Moggachs threaten to extend the dynasty begun by Deborah's mother, Charlotte Hough. First, Deborah Moggach follows the film success of The Best Exotic Marigold Hotel with a version of that genteel comedy transplanted to Wales. Heartbreak Hotel (Chatto, Feb) is set in a B&B in the valleys with a sideline in "courses for divorces". The debut novel by her own daughter, Lottie, called Kiss Me First, was the subject of intense bidding by rival publishers. Picador will publish the tale of online deception and romance in July.
Other likely book group favourites include Curtis "The American Wife" Sittenfeld's Sisterland (Doubleday, June), a story of estranged twins with a shared gift for clairvoyance, and Nadeem Aslam's The Blind Man's Garden (Faber, Feb), set in Pakistan and Afghanistan at the outbreak of the war on terror, another story of intimate survival from the author of Maps for Lost Lovers.
James Hamilton-Paterson is among the most singular and eclectic craftsmen in contemporary fiction; he follows his recent nonfiction elegy to British aviation, The Empire of the Clouds, with Under the Radar (Faber, May), a fictional account of a practice raid by British pilots flying nuclear-armed Vulcan bombers at the height of the cold war.
Posted by Beattie's Book Blog at 6:32 am