Financial Times owner looks to tap into student market by taking 5% share in digital book venture in a deal worth $89.5m 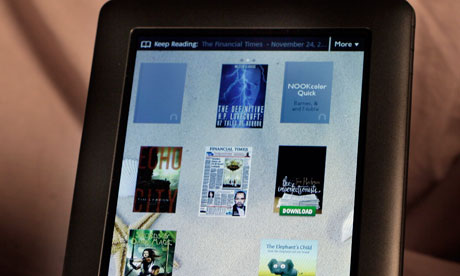 Pearson has taken a 5% stake in Nook, Barnes & Noble’s digital books venture, in a deal that values the business at $1.79bn Photograph: Richard Drew/AP

Financial Times-owner Pearson is to take on Amazon with a move into the e-reader market by purchasing a 5% stake in Nook, Barnes & Noble's digital books venture, in a deal that values the business at $1.79bn (£1.1bn).

Pearson has acquired a 5% stake in Nook Media – a new company that houses Barnes & Noble's e-reader and tablet operations, digital bookstore and 674 college bookstores in the USA – for $89.5m.
The deal, which includes the option for Pearson to up its stake in Nook to 10% in the future, values the business at $1.79bn.


The deal will put Pearson in competition with Amazon's market-dominating Kindle e-reader –Jeff Bezos's company enjoys 95% of sales in the market – with the Nook currently only available in the US.


Pearson said the aim of the strategic investment is to boost its north American learning division by better tapping into the student market with digital products.

"Pearson and Barnes & Noble have been valued partners for decades, and in recent years both have invested heavily and imaginatively to provide engaging and effective digital reading and learning experiences," said Will Etheridge, chief executive of Pearson North America.

"With this investment we have entered into a commercial agreement with Nook Media that will allow our two companies to work closely together in order to create a more seamless and effective experience for students".


Microsoft invested $300m in Nook in April.
Posted by Beattie's Book Blog at 7:23 am