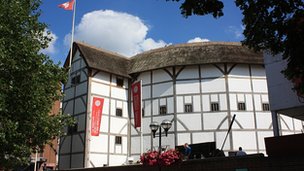 The Globe re-created in London: Did the original theatre have a double billing with Thomas Middleton?

All's Well That Ends Well has another author as well as William Shakespeare, according to research from Oxford University academics.
Thomas Middleton has been revealed as the most likely co-author, according to in-depth analysis of the play's vocabulary, rhyming, style and grammar.
Professor Laurie Maguire says the latest literary research shows groups of writers working together on plays.
"The picture that's emerging is of much more collaboration," said Prof Maguire.
"We need to think of it more as a film studio with teams of writers."
'Two hands' This major study of All's Well That Ends Well says that the most likely and logical explanation for differences in style and inconsistencies in the text is that it is the work of two authors.

Prof Maguire says that a majority of plays written in this era had more than one writer - but the iconic status of Shakespeare has meant a reluctance to consider his work in this way.
She says she is "very confident" that there is "a second hand" in the authorship of the play.
The research by Prof Maguire and Dr Emma Smith, from Oxford University's English faculty, suggests that the playwright Thomas Middleton, a contemporary of Shakespeare's, appears to be the likely candidate.
Writers have their own distinctive literary "fingerprints" - a kind of stylistic DNA - and a highly-detailed analysis of the language in the play shows "markers" strongly linked to Middleton.
The rhyming and rhythms of sections of the play, the phrasing, spelling and even individual words suggest the involvement of Thomas Middleton.
As an example, the word "ruttish" appears in the play, meaning lustful - and its only other usage at that time is in a work by Middleton.
The distinctive way that stage directions are used in places is much closer to Middleton's style than to Shakespeare, says the study.
There cannot be any definite conclusion to this kind of literary detective work - and the academics say there could be other candidates such as John Fletcher - but Prof Maguire says there is an "arresting" stylistic match with Middleton.