…but that's what the veteran playwright and novelist always says. And his latest novel, a laugh-out-loud farce set on a Greek island, gives no hint of being his last word 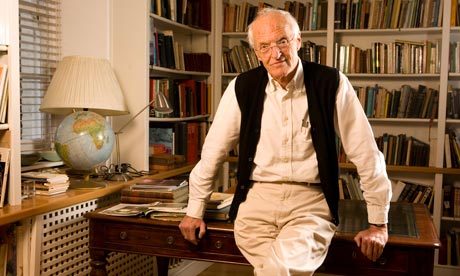 'Hilarious': Michael Frayn at his home in Petersham, south-west London. Photograph: Richard Saker
Reviewers will often say a book made them laugh out loud, when what they mean – funny books being so bafflingly thin on the ground – is that it made them smile; their exaggeration is a symptom of their relief that it even did that. But Skios, Michael Frayn's new novel, his first for 10 years, truly does make you laugh out loud. I sniggered on the train and the bus; I sniggered in the kitchen, the bedroom and, on one occasion, in the shower. I wasn't reading the book in the shower, obviously. But I was thinking about it, and that was enough. Skios, which stars a pompous academic called Dr Norman Wilfred, a shambolic bounder called Oliver Fox, and something called the Fred Toppler Foundation, organiser of an annual thought-fest for rich people – it's like the World Economic Forum at Davos, only without the snow, the balance sheets or Stephanie Flanders – really is hilarious.

"Oh, good," says Frayn, when I tell him this. "I'm glad. It is a bit of an experiment. I wanted to see if you could do farce as a novel. In the theatre the audience is released by the laughter of the people around them. But with a novel you have an audience of only one; no corporate reaction." He pauses. "Of course, at this stage [in my career] self-plagiarism is a terrible danger. I realised recently that Skios is slightly similar to a film I wrote, Clockwise [starring John Cleese]. Though things in Skios go wrong for different reasons. The other difference is that, with a novel, you do need to know what the characters are thinking. You need to know what Oliver Fox thinks he is up to, which is, frankly, not very much."
This is true – though it's the unreliable Fox who sets the dominoes falling when he lands on the Greek island of Skios for a romantic assignation. On seeing a taxi driver holding a sign that reads "Dr Norman Wilfred", Fox decides – who knows why? – to pretend to be him, a move that provides him with the chance to enjoy a little of the Fred Toppler Foundation's hospitality, and to deliver its keynote speech. Meanwhile, on the other side of the island, a lovely young woman called Georgie Evers discovers, to her horror, that the man who has been delivered to her villa is not the gorgeous Oliver Fox but a balding, slightly podgy fellow called Dr Norman Wilfred.
Full story at The Observer
Posted by Beattie's Book Blog at 6:48 am