Sacking a Palace of Culture

Long before I became one of the New York Public Library’s so-called literary lions, I was a habitué of all of that great institution’s research facilities, from the hushed music division in the Performing Arts branch at Lincoln Center to a shabby corner of the Muhlenberg branch on West 23rd Street. I have returned Booker T. Washington’s stare in the Schomburg Center in Harlem, and the glassy gaze of Winnie-the-Pooh (yes, the original Bear of Little Brain, rather mangy now) in what used to be the Donnell branch, on West 53rd. 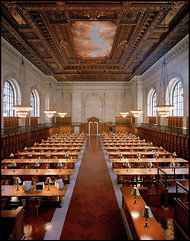 The Rose Main Reading Room, in the main building of the New York Public Library, during a renovation completed in 1998.

But of all the library system’s halls of culture, I’ve spent the most time — months, years — in the main building on Fifth Avenue, where, to cite two epiphanies at random, I once discovered the manuscript of Theodore Roosevelt’s magnum opus, “The Winning of the West,” and studied Nabokov’s exquisite transcription of the metric schemes of Russian lyric poets into colored lozenges that looked like nothing so much as the panes of a butterfly’s wing. Earlier this month I tiptoed into the third-floor Berg Collection, where you need to file a request slip even to sneeze, to consult a copy of Samuel Johnson’s “Journey to the Western Islands of Scotland.” It turned out to have belonged once to James Merrill, and the endpapers were doodled with fragments of his poetry.

Make that three epiphanies. My earliest was an awareness that the profile of the guy next to me in the microfilm reading area (nobly illumined by the refraction of an image he had selected, focused and enlarged) was that of Arthur Miller. What might such a distinguished cardholder be studying with such absorption? I passed behind him and sneaked a peek. It was an old news article about Marilyn Monroe. Illustrated, natch. Something about the stillness of his shoulders touched me. Great playwright and aspiring hack, we were searching together in the city’s principal repository of memory.
It was with a surge of emotion, therefore, that I read newspaper reports about the determination of Anthony W. Marx, the president of the library, to spend $300 million to transform the main building, long devoted to reference, into what sounds like a palace of presentism. He wants to close the library system’s biggest circulating branch, the Mid-Manhattan (located just across the street) and the Science, Industry and Business Library (also in Midtown) and somehow wedge their contents into the already overstocked central research library.
Full story at The New York Times.
Posted by Beattie's Book Blog at 2:38 pm