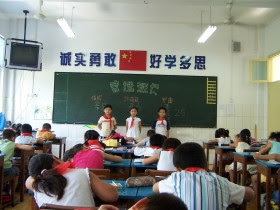 PLEASE VOTE FOR ME
Our first film at the Documentary Film Festival., and we loved it.
This commentary from the website catalogue.
A classic election nail-biter set in a third grade classroom is undoubtedly one of this year’s must see offerings.
Three 8 year olds launch their campaigns to become the class monitor. Therein begins a mini experiment in democracy in a central Chinese elementary school in the world’s largest Communist country that will leave a trail of tears, lies and name-calling.
The incumbent, Luo Lei is also the wiry class bully and the son of an important Police Inspector. Luo Lei’s autocratic style is in stark contrast to his challengers; the fast-talking tubby Machiavellian Cheng Cheng who professes that he will listen to his constituents and rule by fairness, and the sweet pigtailed approval-seeking Xio Fei, the only girl in the group.
The pint sized candidates take to their task with relish but it is the sensitive Xio Fei who breaks down in tears from heckling at her inaugural speech by Cheng Cheng’s supporters, cracking under pressure and making it a two “boy” race. The two boys with the help of interfering parents engage in all forms of chicanery, including bribery and deal-making, and slug it out right down to the finish line.
Director Weijun Chan manages to capture the tremendous exchange that takes place between the children as well as the children and their parents.
Can a 55 minute documentary about a junior school election campaign provide fresh insight into the wider politics of one of the 21st century’s largest free-market experiments? Whether it does or not, the antics of the charming subjects and their parents make Please Vote for Me superb eye-opening entertainment for all age groups.
Posted by Beattie's Book Blog at 8:36 am