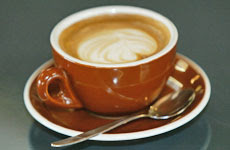 LONDONERS GOING FLAT OUT TO GET A TASTE OF KIWI FLAT WHITE
The English just love our coffee.
Kiwi coffee connoisseurs have long claimed New Zealanders make the best brew, but now - in London at least - we might be about to prove it.
London magazine Time Out is an authority on what's hot in the city, and its annual eating and drinking awards are followed closely.
So it's something special that this year, three of the five nominees in the "Best Coffee Bar" category are Kiwi cafes - Flat White, Sacred and Bullet.
The winner will be announced on Tuesday.
The cafe scene in London was seen by many as in dire need of a shake-up when these three set up shop. Many a New Zealander in London has been dismayed by the homogenous high-street chains serving bland coffee and overpriced food.
From the New Zealand Herald this morning. Link here for full story.
Greg Bowker pic from NZ Herald.
Footnote - we disovered Flat White while in London last year and were regular visitors.
Posted by Beattie's Book Blog at 9:51 am