NEW DNA FOR HIGH STREET
PUBLISHERS HAVE WELCOMED the success of David Roche's £20m MBO of Borders, secured last Friday with backing from entrepreneur Luke Johnson's Risk Capital Partners.
HarperCollins Sales and Marketing Director David Swarbrick said: “We are delighted. Every publisher wanted this scenario. The reason it is exciting is that we get some new DNA on the high street. Borders now has a charter to do what they want do to - there is this great release of creative energy.”
Tim Hely Hutchinson, CEO of Hachette Livre UK, said: “It is in all our interests that a rich variety of booksellers flourish on the high street and we look forward to hearing more from David and his team about their plans for Borders' future.” The deal sees a brand license agreement in place which allows the new venture to trade under the Borders brand. The US company retains a 17% equity, described by Roche as “a big vote of confidence in the future of the UK and Ireland businesses.
At the outset, Borders US were clear that they were seeking strategic alternatives, that this wasn't about getting rid of an ailing bus.
The above story from Publishing News where you can read it in full 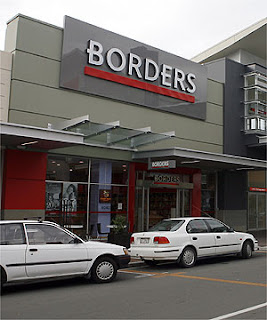 It is hard to imagine that New Zealand publishers will react with any pleasure to the news that Whitcoulls now looks likely to take over Borders NZ stores following their application yesterday for compettition clearance.
Rather than adding new DNA as in the UK situation, here in NZ such a takeover will reduce DNA, read competition and frankly its hard to imagine anyone being excited about the NZ Borders' stores becoming part of the Whitcoulls chain.
Posted by Beattie's Book Blog at 6:43 am

Thank you Bookman and thank goodness someone with your standing and mana in the bookworld has the guts to say something like this about the likely takeover of Borders by Whitcoulls.
Not only is it bad for publishers, more importantly it is a disaster for the
book- buying public. It will mean a huge loss in the range of titles available and significant loss of price competition.
If the authority concerned had any balls they would block the takeover but I'm not holding my breath.

Well put Grumpy.
I reckon if the takeover was the other way around, Borders taking over Whitcoulls, we Kiwis would have something to cheer about, but the proposed takeover is so very sad.The loss of those Borders stores is a disaster. Even if Whitcoulls keep them all open, and I can't see that happening, the diversity and depth of the book stock will disappear overnight. Boo hoo.