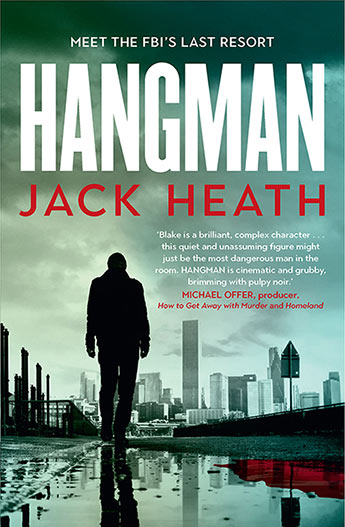 Download cover
Meet Timothy Blake, codename Hangman. Blake is a genius, known for solving impossible cases. He's also a psychopath with a dark secret, and the FBI's last resort.
A 14-year-old boy vanishes on his way home from school. His frantic mother receives a terrifying ransom call. It's only hours before the deadline, and the police have no leads.

But this time Blake might have met his match. The kidnapper is more cunning and ruthless than anyone he's faced before. And Blake has been assigned a new partner, a woman linked to the past he's so desperate to forget.

Timothy Blake has a secret, one so dark he will do anything to keep it hidden.

And he also has a price. Every time he saves a life, he takes one…

Already sold into five territories, Hangman is a mesmerising dissection of the criminal mind and a bulletproof thriller.

'Jack Heath is set to be the next Matthew Reilly.' Tara Moss, internationally bestselling author of Assassin

'Learn this kid's name, read his books. He's someone now, going to be much more someone later.' Michael Grant, internationally bestselling author of Gone
More books by this author

This is the first adult novel by popular YA writer Jack Heath. Jack lives in Canberra and is the author of 19 acclaimed fiction titles for middle-grade and YA readers. His books include the real-time series 300, 400 and 500 Minutes of Danger, the choose-your-own-ending Countdown to Danger books (Scholastic), a collaboration with international illusionist Cosentino, and YA novels such as The Cut Out, a multi-award-nominated espionage thriller. His books have sold more than 100,000 copies worldwide and been translated into several languages. First published as a teenager, in the course of his research Jack has trained with firearms, performed street magic, visited morgues and prisons, travelled through 11 countries and read only books by women for a year. jackheath.com.au