Where the Dead Men Go by Liam McIlvanney, The Black Life by Paul Johnston, The Edge of Normal by Carla Norton, The Last Winter of Dani Lancing by PD Viner and I Was Jack Mortimer by Alexander Lernet-Holenia 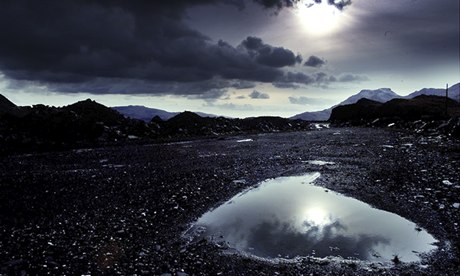 A corpse is found in a flooded quarry in Liam McIlvanney's Where the Dead Men Go. Photograph: Christopher Thomond for the Guardian

Like his exceptionally fine debut, All the Colours of the Town, Liam McIlvanney's second novel, Where the Dead Men Go (Faber, £12.99), features political journalist Gerry Conway. Still clinging to the dream of old-fashioned investigative reporting, he has been lured back to the Glasgow Tribune after being fired four years earlier, even though the broadsheet is "in freefall, bleeding readers every quarter" and there's no budget for anything more than topping and tailing press releases. What the ever-dwindling readership wants is news of the "city's tribal battles, on and off the pitch … Bigotry and violence. Football and crime." So, when ace crime reporter Martin Moir disappears, Conway is deputised to cover an old-school gangland killing. When Moir turns up again, it is as a corpse lashed to the steering wheel of a car in a flooded quarry. Conway decides to find out what has happened and soon finds himself caught up in the cat's cradle of symbiotic relationships between big business, smoothly ambitious politicians and the city's criminal underworld, as lucrative contracts ar
e handed out ahead of the 2014 Commonwealth Games. Distinctive, vivid and very well written, Where the Dead Men Go more than lives up to the promise of its excellent predecessor.

Paul Johnston's sixth Alex Mavros novel, The Black Life (Crème de la Crime, £19.99), is a well-imagined, well-rendered time-slip in which events during the Holocaust and in post-Olympic, pre-economic-meltdown Greece are painfully joined and almost, but not entirely, resolved. Mavros is approached by wealthy jeweller Eli Samuel to find his Uncle Aron, reportedly seen in Thessaloniki more than 60 years after he was thought to have perished in Auschwitz. It soon becomes clear, however, that Samuel's daughter Rachel, while helping Mavros with his investigation, is also pursuing her own agenda. The Black Life has the whirlwind pace of a good thriller, but it is far more mentally engaging, asking whether it is possible to judge the acts of people who find themselves in extreme situations by the standards of normal life.

The question of whether people who have experienced extraordinary events can ever entirely reacclimatise to ordinary life is explored in The Edge of Normal by Carla Norton (Macmillan, £12.99). Reeve LeClaire was kidnapped when she was 12 and held for four years by a sadistic pervert. Now she is 22, trying to live an independent life in San Francisco with the help of her psychiatrist, Dr Lerner, seeking normality and hoping for intimacy, but fearing that she will never achieve it. When Dr Lerner asks her to help a 13-year-old girl who has just been freed after being held captive for a year and repeatedly violated, she reluctantly agrees. The situation is more complex than it first appears, and the mechanics of the mystery certainly hold the attention, but what stands out about this debut novel is the thoughtful and unhistrionic treatment of a difficult theme.

Although set in Britain, PD Viner's first novel, The Last Winter of Dani Lancing (Ebury Press, £12.99), has a disconcertingly transatlantic feel. Twenty years after 21-year-old student Dani was found dead in mysterious circumstances, her case is about to be reopened by Tom, the now-senior policeman who loved her when he was young. An over-complicated structure with time-shifts and multiple points of view – including the ghost of Dani, who is unfortunately unable to remember how her corporeal self met its end – makes for a fair bit of confusion, at least in the early stages, but it is worth persevering for a genuinely intriguing read.

Originally published in 1933 and twice filmed in its original German, I Was Jack Mortimer by Viennese author Alexander Lernet-Holenia has now been published for the first time in English (Pushkin Press, £12). No taxi driver, whomever he may once have had in the back of his cab, would be able to top the story of Ferdinand Sponer, whose fare, alive and well when picked up, promptly dies, shot through the throat in the middle of a traffic jam. Sponer, a hapless drifter with a fiancee he can't be bothered to marry and an obsession with an aristocratic former fare, has no idea who murdered his passenger. Thwarted in his efforts to tell the police, he panics and dumps the corpse in the Danube, but fails to clean out his cab. As events spiral out of his control, he ends up impersonating the dead Jack Mortimer – who turns out to be an American gangster whose mistress has a jealous husband. Although this isn't, as transator Ignat Avsey claims, "the most magnificent thriller ever written", it is certainly a fascinating snapshot of Vienna between the wars, pacey and entertaining.
• Laura Wilson's latest novel is The Riot (Quercus).
Posted by Beattie's Book Blog at 6:03 am