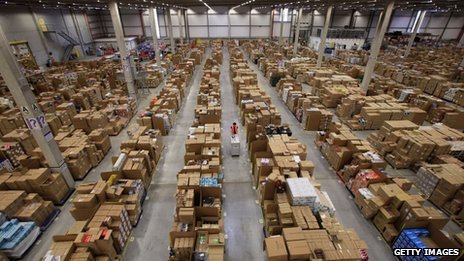 Online retailer Amazon employs more than 20,000 people across its eight warehouses during its peak Christmas season

A BBC investigation into a UK-based Amazon warehouse has found conditions that a stress expert said could cause "mental and physical illness".

Prof Michael Marmot was shown secret filming of night shifts involving up to 11 miles of walking - where an undercover worker was expected to collect orders every 33 seconds.
It comes as the company employs 15,000 extra staff to cater for Christmas.
Amazon said the safety of its workers was its "number one priority." 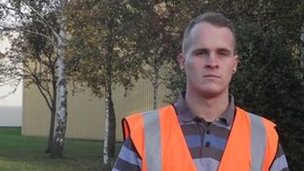 Undercover reporter Adam Littler, 23, got an agency job at Amazon's Swansea warehouse. He took a hidden camera inside for BBC Panorama to record what happened on his shifts.
He was employed as a "picker", collecting orders from 800,000 sq ft of storage.
A handset told him what to collect and put on his trolley. It allotted him a set number of seconds to find each product and counted down. If he made a mistake the scanner beeped.

"We are machines, we are robots, we plug our scanner in, we're holding it, but we might as well be plugging it into ourselves", he said.

Prof Marmot, one of Britain's leading experts on stress at work, said the working conditions at the warehouse are "all the bad stuff at once".
He said: "The characteristics of this type of job, the evidence shows increased risk of mental illness and physical illness."
"There are always going to be menial jobs, but we can make them better or worse. And it seems to me the demands of efficiency at the cost of individual's health and wellbeing - it's got to be balanced."


Amazon said that official safety inspections had not raised any concerns and that an independent expert appointed by the company advised that the picking job is "similar to jobs in many other industries and does not increase the risk of mental and physical illness".
More

And report at The Bookseller
Posted by Beattie's Book Blog at 6:20 am