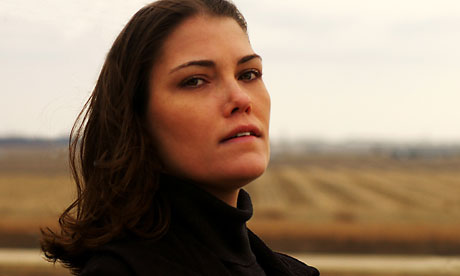 Angry exchanges … Julie Cross.
A literary punch-up that had been brewing for a while finally erupted between a bunch of readers, authors and agents on Goodreads – the vast online site where millions of members discuss the world's books. In the same week that award-winning children's writer Anthony McGowan caused a stir with his "scorching" Guardian review of Blood Red Road by Costa winner Moira Young, the Goodreads flame war flared across Twitter, sparked by writers and agents who seemed to be stamping on negative reviews.

It all started with a "snarky" (or "honest", depending on who's side you're on) review of a much-hyped YA novel, Tempest by Julie Cross, just published in the UK by Macmillan Children's Books. A sarcastic response and put-downs of reader views on the Goodreads site by Cross's author friends, and comments by her agent, caused outrage. While Cross responded gracefully, other YA authors and agents took the fight to Twitter in a spectacularly misjudged bout of reader-bashing, "sneering at the people who make their ****ing books reach the NYT bestseller list", The Bookwurrm judged.

Things escalated further as authors and agents publicly discussed rigging the ratings on Goodreads and Amazon to push up the visibility of good reviews and "hide" bad ones.

It's left a lot of passionate young bloggers, reviewers and readers disillusioned and upset. "I've seen way more readers turned off books by author behaviour than by bad reviews," claims one of the Book Lantern bloggers, a group of young readers from all over the world, citing recent incidents of "authors and editors muscling in on reviews, being very aggressive or judgmental of bloggers".

Twilight and The Hunger Games showed young adult fiction to be a potential goldmine. Authors and publishers quickly latched onto the galaxy of online book sites, where a vast young readership roams, as the key to global success. But can you harness that energy? Should you even try? More and more bloggers are reluctant to host the author blog tours that now swamp book sites – only to find that publishers refuse them free advance review copies of the new books they want. Who wins there? With such precarious balances of power, a bust-up was always likely.

Whose book is it anyway? The hardest thing a writer has to learn is that once you publish a book, it's no longer truly yours – even though it's got your name on the front and it lives inside you. It belongs to the readers now. All you can do is steel yourself as you push it out into the world, stay gracious, and get busy with the next one.

And if you can't stand the heat of the blogosphere – don't Google yourself
Posted by Beattie's Book Blog at 3:49 am