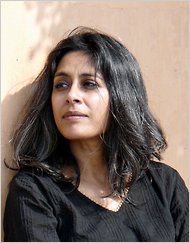 AN ATLAS OF IMPOSSIBLE LONGING
By Anuradha Roy 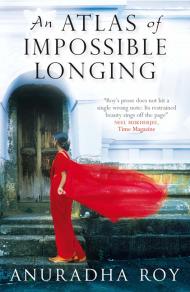 The novel opens with the image of a house, “a Roman-­looking affair with tapering pillars” that seems to float down a river in flood. First its veranda goes under and then its windows, until the rooms look drowned and the building itself appears to leave its moorings. The imagination of disaster is never far from these pages, and though this house will finally stay on its foundation, it does get swamped by a monsoon-swelled river, and with consequences that are bitter indeed. That waterfront property is only one of the three houses in which Roy’s narrative is played out — each of them bedraggled, each living on after its time, and none of them a proper home.

In the early years of the 20th century, the Calcutta-born Amul­ya Babu moves his family to a small town called Songarh, where he builds a house not far from the forest and starts a business manufacturing herbal medicines and perfumes. He loves the isolation and the chance for a flower-filled garden, but his wife doesn’t, and eventually she begins to spout a series of sweet-tempered obscenities, words nobody can quite believe she knows. In one of her many delicate touches, Roy never gives this problem a name. Amul­ya’s wife doesn’t suffer from Tourette’s syndrome, but rather from something none of the characters understand. Eventually Amulya feels he has to lock her in her room; she is a hidden though not forgotten wife, mother and, in time, grandmother.
Then people begin to die. An Englishman is murdered across the road, a daughter-­in-law goes in childbirth and Amulya himself is felled. So we move on to the next generation, when the house fills with what isn’t quite a family. Amulya’s oldest son still lives there, but he and his wife are childless and ever jealous of their motherless niece, Bakul, a girl whose own father can hardly bear to look at her, so powerfully does she recall his dead wife. And there is also Mukunda, a boy the family has taken in, a bright child plucked from an orphanage. He and Bakul share everything, but the rest of the household isn’t certain about him. They don’t know his parentage and hence his caste, and make him eat from a special plate lest he pollute their food.
Roy has a keen sense of the statements people make with their houses. For Amulya, his home in Songarh stands as both a declaration of independence and an attempt to establish a family. For his widowed son’s father-in-law, Bikash, the house on the river with which the novel begins is above all a mark of taste. Yet to those who come later such buildings seem, above all, a burden: offering shelter, but also a reminder of what hasn’t worked out.

It’s hard to miss the symbolic weight in this, and of course houses have played such parts in novels before. In English fiction, they often give their names to the book itself — “Mansfield Park” — and imply an ideal social order. In the American South, they may suggest the ghosts of the past, and in Ireland the “big house” tells of a sundered and unworkable relationship between different populations. The house has filled all those roles and more in Indian fiction in English, from the old family mansion of Anita Desai’s “Clear Light of Day” to the apartment building in Manil Suri’s “Death of Vishnu.” It is family and nation, order and chaos, and its thematic importance remains impossible to overstate.

The refreshing thing about “An Atlas of Impossible Longing” is that Roy never forgets that a house is also a bit of real estate — which becomes clear toward the end of the book. She begins her narrative in the third person but concludes it in the first-person voice of the orphan Mukunda. Banished to a Calcutta boarding school when he and Bakul hit puberty, he finds himself living in the city in the mid-1940s, in the rambling house of a Muslim schoolteacher. As independence and partition approach, the teacher asks Mukunda to take care of the place while he himself moves to the safety of what will become East Pakistan and later Bangladesh. At first, Mukun­da proves a good steward, but then he goes to work for an unscrupulous property developer who specializes in such abandoned households. At this point, Mukunda’s temptations and the novel’s coincidences begin to multiply.

Footnote:
Published by the Free Press, an imprint of Simon and Schuster, three years after its U.K. release. It will also this week be published in France, by Actes Sud, and has been highlighted by Livres Hebdo, the French equivalent of Publishers Weekly, as one of their three books of the month
Posted by Beattie's Book Blog at 8:32 am