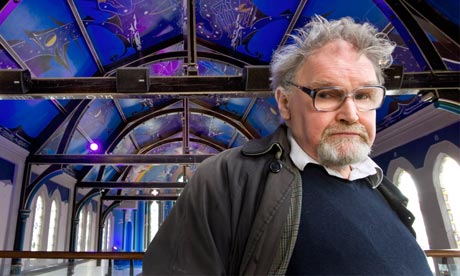 Alasdair Gray's performance, which will close the festival, was one of the first to sell out. Photograph: Murdo Macleod
Many of the highest-profile events at the Edinburgh book festival sold out on the first day of full ticket sales after an unprecedented surge in demand caused chaos for its online booking service.

Events including Alasdair Gray's closing performance, AC Grayling's conversation with retired bishop Richard Holloway, and readings by Sarah Brown and Simon Callow were among the first to sell out after record levels of bookings over the internet and the festival's telephone booking line.

The first customer began queueing outside the ticket office at 3am on Sunday, buying seats for authors including Bettany Hughes and Ian Rankin. Another 230 joined the queue before it opened at 8.30am for full public sale.


The website had more than 300,000 hits and the phone lines took 25,000 calls in the first hour of sales, more than double last year's volumes.

By 6pm on Sunday, nearly 40 of the events at this year's festival, which is sponsored by the Guardian, had sold out. They included children's events such as Charlie and Lola and an event with children's laureate Julia Donaldson, as well as writer's workshops and appearances by Ahdaf Soueif and Hisham Matar – discussing the Arab spring – Martin Sixsmith and Tam Dalyell.


Nick Barley, the Edinburgh international book festival's director, apologised to those who were unable to book online on Sunday morning, but said many of the early problems had been resolved. He admitted that buyers were very frustrated after the online box office failed to cope with demand, forcing many to spend several hours repeatedly trying to make bookings.

"It is enormously gratifying that literary stars and unknown authors from Scotland and further afield are able to attract such extraordinary interest," he said.

"Having invested a significant amount of time, staff and financial resource to develop a system to handle the demand, we were disappointed that some customers had a frustrating experience on the website at the start of the day."
Posted by Beattie's Book Blog at 8:23 pm