Just like independent booksellers, these labours of love need – and deserve – your love 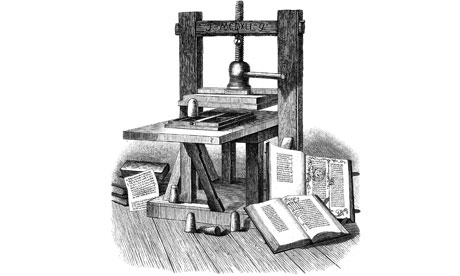 Small but significant ... An engraving of Gutenberg's press. Photograph: Interfoto/Alamy
It is Independent Booksellers' Week, when we raise the flag for those who forge a retail path of literary quality above cut-throat supermarket deals on the top 10 bestsellers. While we're doing so perhaps we should unfurl a banner or two for their close cousins the independent presses, who toil to bring to light literature that will never trouble those bestseller lists but is worthy of our attention all the same.


Let us be clear about one thing – I am not talking vanity presses or self-publishing. I am speaking of the true independent or small publishing houses, those who select their books on quality, who provide editorial input, and who do not seek monetary input from the author. And there are plenty of them – check out this list on the website Lollipop, which has been listing small presses for more than a decade.


Some might consider the small press book an unlovely thing. It is often of a non-standard size and shape … more square than the usual mass-produced paperback, not as tall as a trade paperback format book. It is sometimes heavier than its page count suggests. The paper stock can be brighter and whiter and heavier than that in the books you might pull off the three-for-two tables. The covers are generally of thinner card and may wilt and curl under the shop's hot lights – should they get as far as the high street! Perhaps the inexorable rise of the ebook will take away the problems of the delivery mechanism, but the indies' problems don't begin and end with curly covers.


They carry with them a lot of baggage, and not just due to their heavier paper stock. Aside from the aesthetics, the first bar to readers is the fact that they're so darned hard to get hold of. Small presses don't have the luxury of big distribution companies, nor of high print runs or warehousing capabilities. Some even print-on-demand, creating a book only when someone buys one. Online retailers such as Amazon and Book Depository, of course, have been a godsend to the indies, but also show up another major hurdle for potential readers to overcome: the price.


A quick scout on Amazon shows the bestselling mainstream paperbacks knocked down to as low as four quid in some cases. A pricing structure that most indie presses could only dream of. Those aforementioned economies of scale from high print runs not being an option for the indies, individual unit costs soar. The trick is to bring it in under what I believe is a major psychological barrier for anyone buying a paperback today: the magic tenner. Ten quid could buy you two, maybe three mass-produced paperbacks. Why should you swap that for one small-press book?


Which brings us on to the biggest problem for readers when faced with an indie, and it might not even be a conscious one. But whether it's front-of-brain or hidden deep inside, the thought will be there: "If this book is so good, why isn't it being published by a mainstream house?"


A good question. And let me tell you this: Any author who tells you they'd much rather be published by Garden Shed Press or whatever than by HarperCollins or Orion is telling you porkies. And if you can tell me that 99 per cent of small-press books haven't previously been submitted to mainstream publishers, and rejected, I'll print this article off and eat it.