South Bank Show bows out with an award to laud Bragg 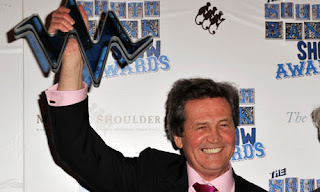 In their last outing today, the awards did the decent thing and handed a prize to Lord Bragg – Melvyn Bragg to most of us. The awards have run for 14 years and always been eclectic, a reflection of the programmes that ran for 32 years before ITV suddenly pulled the plug last year.

Bragg has not been shy of complaining about ITV's decision – "strange, abrupt, bad-mannered," he told one interviewer – but today he was charm itself.

Accepting the outstanding achievement award he said: "George Eliot said, 'art is the nearest thing to life'. That's what I believe and that's why we made the programmes."

His fellow guests were not so reticent. ITV is due to screen the awards on Sunday night and it may seem a form of self-flagellation. "Good riddance," joked Rob Brydon. "Let's get rid of any bastion of culture and lie around in pig shit." Or Billy Connolly: "How sad that the South Bank Show has gone the way of all flesh. Without arts there is no joy, without arts programmes there's only reality television."

Or PD James, who said the occasion was like a wake, lamenting the loss by borrowing from Auden's Stop All the Clocks because "only poets can express the sorrow I feel". Or Sir Ian McKellen: "I don't know how it's happened or why it's happened and it shouldn't have happened."

And perhaps most cuttingly, Prince Charles, who, in a filmed contribution, said: "The programme remains without rival. I cannot say I am encouraged as mainstream television abandons such a unique and special commitment.Civilisation needs all the help it can get. It is a sad loss."

Full report including details of the literature prize at The Guardian online.