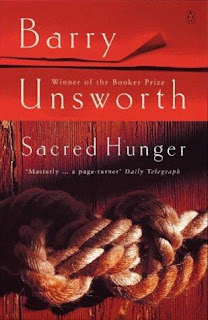 MAN BOOKER PRIZE :
IT'S BARRY UNSWORTH FOR ME
John Walsh writing in The Independent picks one of the 1992 joint winners as his Booker of Bookers.
Mirror, mirror on the wall, which is the fairest Booker book of all?
Trying to judge literary excellence by committee means that the prize has sometimes fallen victim to compromise voting, tokenism, or the suspicion that a book suitsthe prize rather thandeserves it. It's hard to claim that the 41 prize-winning novels in the Booker's history represent the flower of English literature between 1969 and 2007.
What will the ultimate Booker book represent under the gaze of eternity? Should Ian McEwan's Amsterdam, perhaps his least interesting book, win it, or Graham Swift's Last Orders, when their much better (and shortlisted) works, Atonement and Waterland, failed to win?
And will the vote in July reveal a true literary masterpiece, or just the prize-winner that most appealed to public taste? If so, then Roddy Doyle's Dublin comedy Paddy Clarke Ha Ha Ha should be in with a shout, as should Yann Martel's unclassifiable Life of Pi.
Midnight's Children, chosen as "the Booker of Bookers" in 1993, on the prize's 25th anniversary, has historic importance as the first masterpiece of post-colonial literature. Martell and Rush-die are both strongly favoured by the bookies – 4/1 and 5/1 respectively – as are Michael Ondaatje's The English Patient, The Famished Road by Ben Okri – awarded, the judges hinted, as a tribute to the literature of emerging nations – and Arundhati Roy's The God of Small Things.
If there were any justice, the overall prize should go to Barry Unsworth's awe-inspiring 1992 joint winner, Sacred Hunger. If I were a betting man, I'd choose Martell, Rushdie, Roy, JM Coetzee's Disgrace, Kazuo Ishiguro's The Remains of the Day and Alan Hollinghurst's The Line of Beauty to make the final six.
Posted by Beattie's Book Blog at 5:36 pm