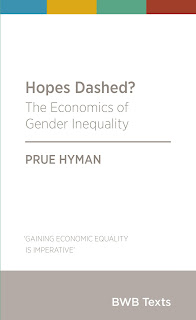 In the early 2000s New Zealand could boast women simultaneously occupying its highest seats of power – Prime Minister, Chief Justice, Governor-General and Chief Executive of its largest corporate. An appropriate and fitting list for the first country where women won the vote.


But what have those remarkable achievements meant for women of today? How do they  accord, if at all, with the wider state of affairs for women’s economic status and well-being.  What is the state of women’s work in New Zealand and how that is remunerated? Has progress, as exemplified by high-flying individuals, been mirrored across the social and ethnic spectrum? And, if not, what can be learnt from a critical assessment of how economic gender inequality plays into the wider debate around issues of inequality in Aotearoa?


Prue Hyman, a prominent feminist, economist and former Associate Professor of Economics and Gender and Women’s studies at Victoria University, is uniquely positioned to address these questions. In  this important, new BWB Text she builds on, and brings forward, the work outlined in her 1994 book Women and Economics: A New Zealand Feminist Perspective. Back then Hyman’s cautious optimism on a long-term trend towards greater economic independence for women was overlaid with a warning that “under current policies we are heading for a dual economy with accentuated differences between haves and have nots’’.  This sets the context for a much-needed appraisal of how women’s lives and work have changed over the ensuing two decades. As such it is a critical contribution towards rebalancing the conversation on gender inequality in New Zealand.


Hopes Dashed? The Economics of Gender Inequality reenergises and brings fresh insights to contemporary debates on gender and the economy. In particular it looks at the fate of lower paid women and the impact of class and ethnicity; it contrasts greater education and range of jobs for women with trends towards individualism, lower unionisation and discrimination; it points out the inequities suffered by sole parents, mostly mothers, whose work is either ignored or undervalued; it argues that equality for women in the labour market benefits not only women but men and children as well.


But this essential BWB Text also raises wider structural questions:  how appropriate and useful are our traditional approaches to measuring the economy; and how relevant and productive in an uncertain and increasingly fragile world are our aspirations for it?
BWB - Print book $14.99   ebook - $4.99
Posted by Beattie's Book Blog at 2:21 pm